A collection of porcelain designated as a “national treasure”. Companies can contribute to this acquisition and get a 90% tax break.

This exceptional collection of porcelain, which is noteworthy both for its size and for the consistency and quality of its elements, includes pieces intended for the imperial family and for the furnishing of imperial palaces, use as diplomatic gifts and gifts offered by the sovereign to his wife or by the Empress to women in her entourage holding a post in the palace. .

After twenty-one years of searching, a New York collector must now part with his pieces. He agreed to give the Château de Fontainebleau the opportunity to acquire the best part of his collection, a set of forty-six works.

This collection has been classified as a work of major heritage interest by the French National Treasures Commission in order to facilitate its acquisition.

For companies, under the provisions of Law 2002-5 of 4 January 2002 relating to museums in France, the tax reduction is equal to 90% of the amount of a donation made in cash, up to a limit of 50% of the corporation tax due (only for the financial year in which the donation was made). In addition, the Château offers 5% in direct compensation (provision of space, tours, entrance fees, visibility, etc.).

Private individuals wishing to participate in its acquisition are entitled to the usual advantage of 66%.

The collection has been divided into 7 coherent lots in order to make it easier to find patrons. 3 lots have already been acquired thanks to the ‘Des Sèvres pour Fontainebleau’ operation launched in 2016 at the Aveline Gallery.

Lot no. 1 - Vase decorated with the portrait of Augustus 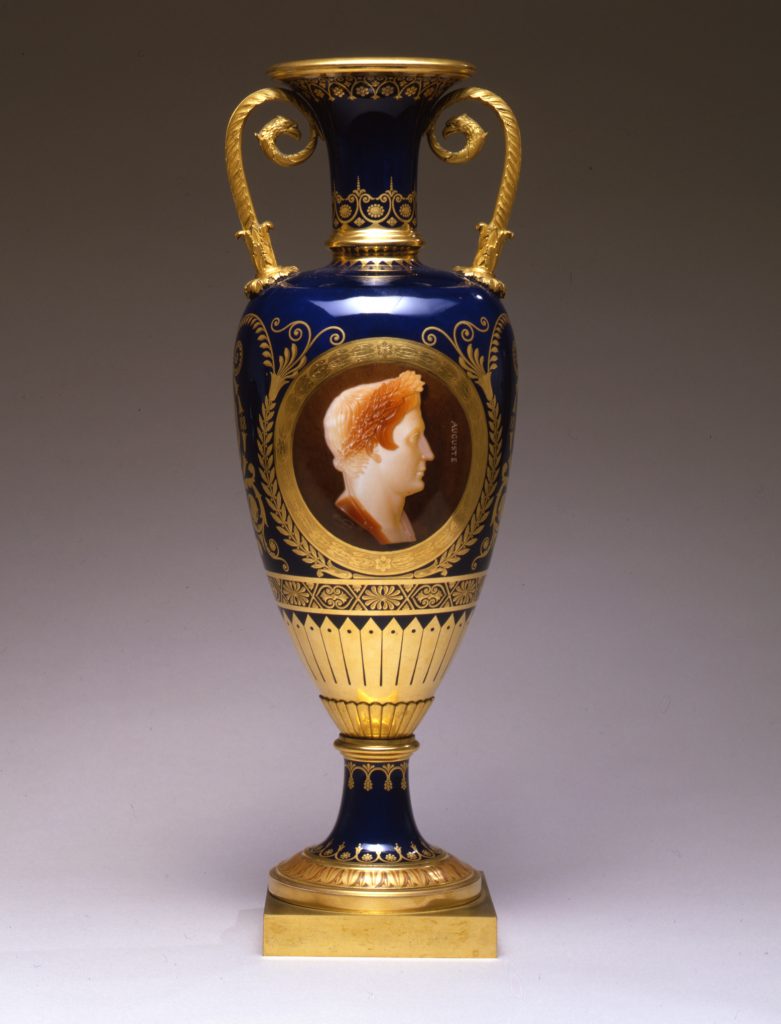 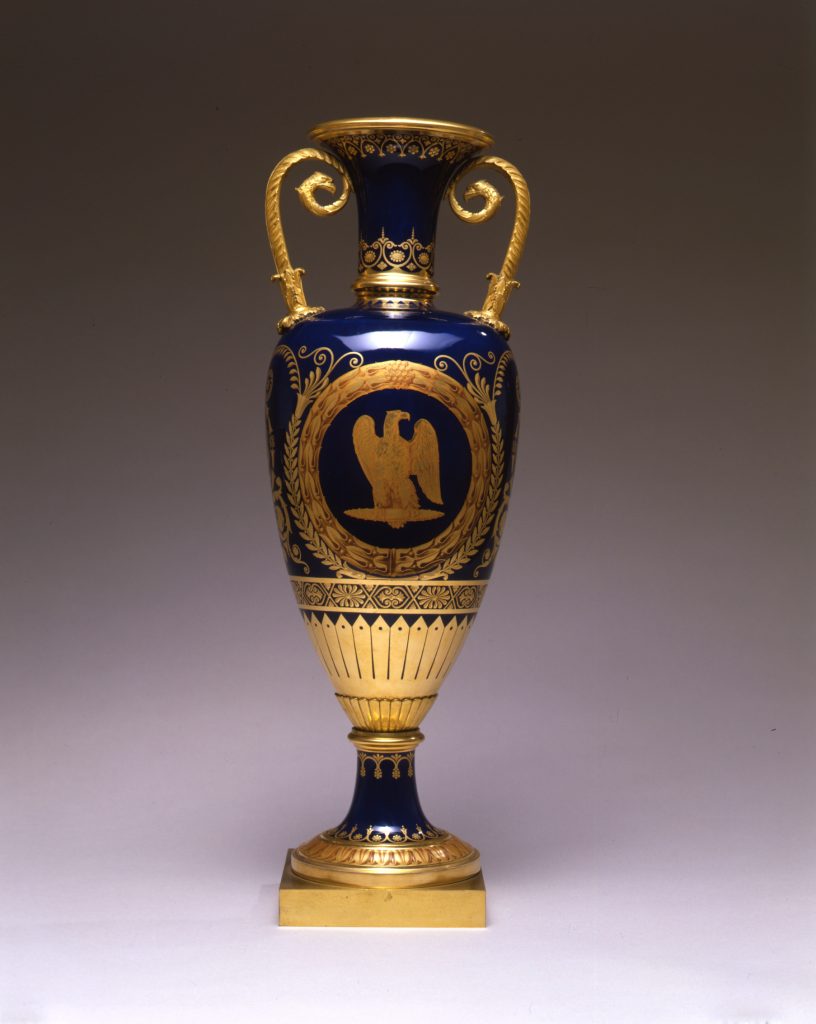 A pair of ‘fuseau’ vases commissioned by Napoleon and decorated with the profiles of Caesar and Augustus were intended to adorn the former pontifical residence of Quirinal, which became the imperial palace of Monte Cavallo in Rome for his son.
These two vases form an inseparable pair in themselves. The vase with the image of Julius Caesar has already been acquired by the castle.

The vase depicting Augustus has yet to be acquired.

MAKE A DONATION for the Augustus vase

Lot no. 2 - Vase decorated with the portrait of Marie-Louise

This ‘fuseau’ vase is decorated with the portrait of Empress Marie-Louise wearing a black velvet travel dress and a hat richly adorned with white feathers. It was given by the Emperor to his sister-in-law Catherine, former Queen of Westphalia who had taken refuge in France, in the new year 1814. This is an extremely rare unofficial representation of Marie-Louise.

make a donation for the Marie-Louise vase 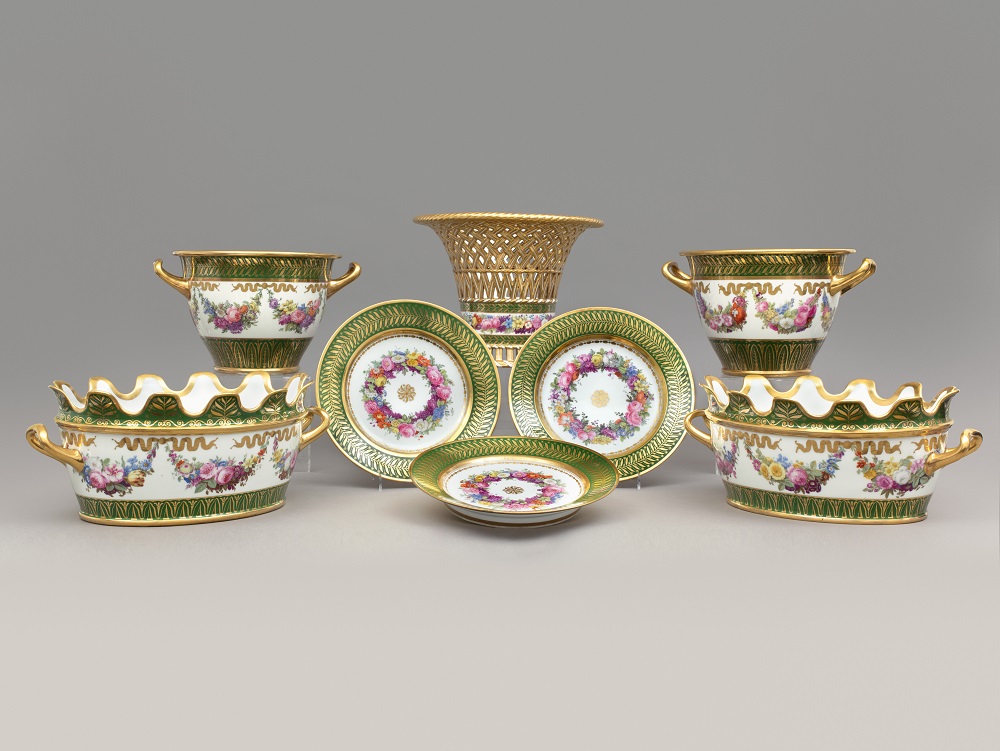 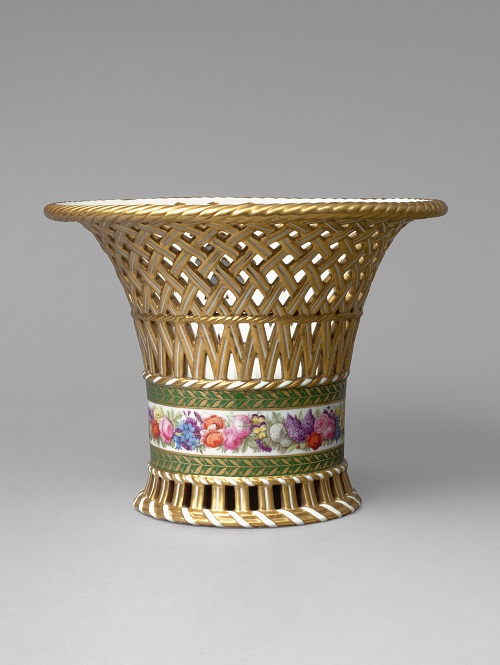 The remaining elements of this service acquired by Prince Borghese, husband of Pauline Bonaparte, include seventeen porcelain pieces: two ‘soup’ plates, ten ‘ordinary’ flat plates and five ‘Etruscan’ shaped pieces, including a basket, two wine or cooling buckets and two glass buckets known as ‘Etruscan glass holders’. These pieces will complement the Borghese goldsmith’s items already held in Fontainebleau. The two sets of ceramics and goldsmith’s art will be presented in the form of a set table.

MAKE A DONATION for the Borghese service

In 1813, the Duchess of Montebello received an Egyptian lunch set, one of the seven cabaret sets made in Sèvres, inspired by scenes from Dominique-Vivant Denon’s Journey to Lower and Upper Egypt.

This cabaret set given to the Duchess of Montebello is complete, comprising four shaped items: a teapot, a bowl, a milk jug and a sugar pot, as well as six ‘litron’ cups and their saucers decorated with portraits of men in Egyptian costume. Three pieces resting on a pedestal are Egyptian in shape: the bowl, the sugar bowl with ibis-headed handles, and the teapot. This teapot is the only one known from the entire production of Sèvres to be entirely Egyptian in shape, with a snake-shaped spout.

make a donation for the Egyptian lunch set 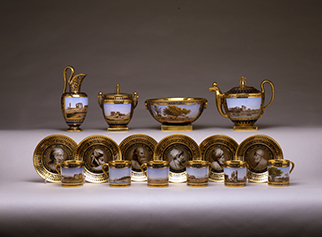 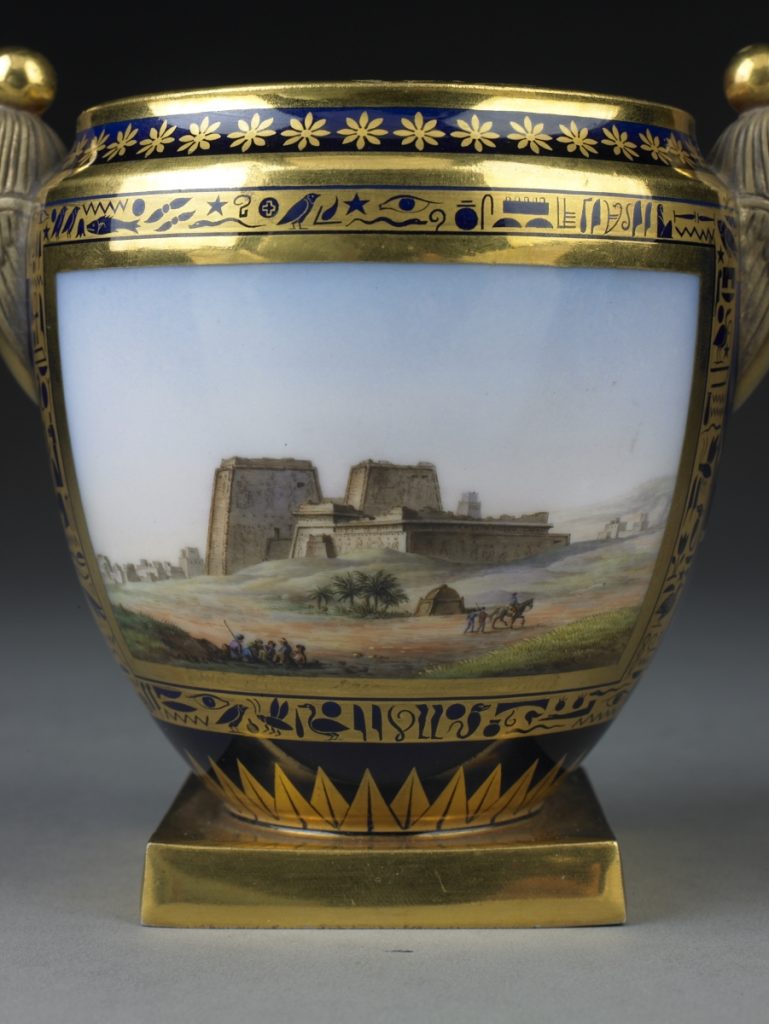 Chest of Drawers in the Louis XV Room

A masterpiece of French cabinet making classified as a national treasure

A rare testimony of a gallery disappeared