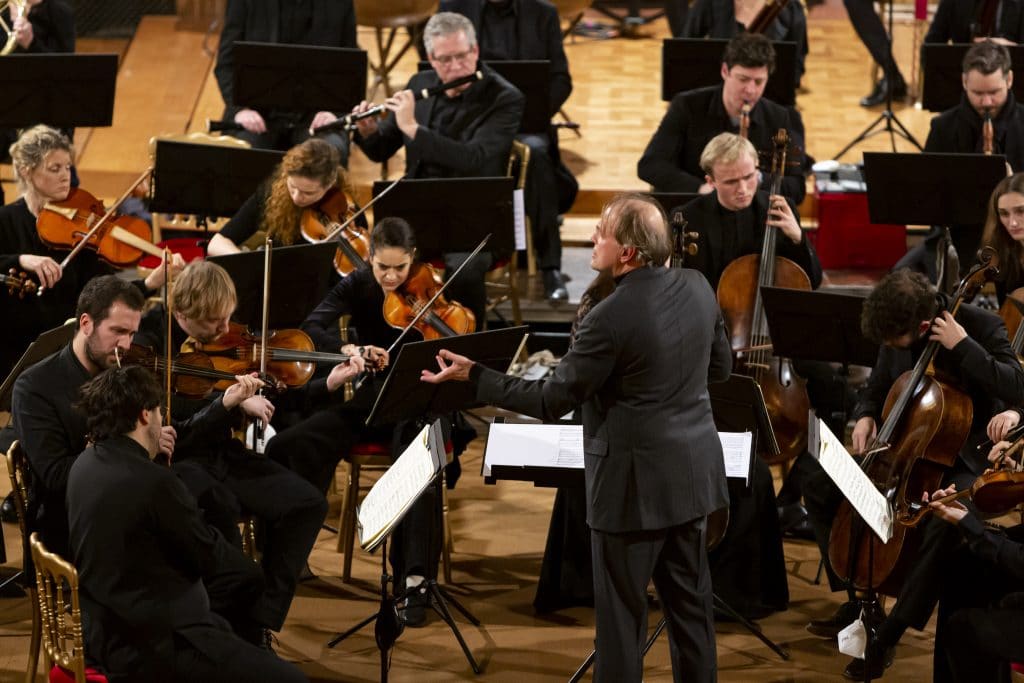 In 2022, Thomas Hengelbrock and the Balthasar Neumann Choir and Ensemble will continue to take over the Château de Fontainebleau. Their residency unfolds each season around masterclasses, interactions with visitors through rehearsals that are open to the public and concerts in the grand spaces of the castle.

These concerts are made possible thanks to the support of Mrs. Sherry and Mr. Robert Johnson.

Concert and show: “Posterity”
Under the direction of Duncan Ward

A unique musical and visual experience that mixes classical music, technology and graphic projections! The percussions of the Repercussion ensemble, the instruments of the Balthasar Neumann orchestra and electronic visual effects come together live. A high-tech hologram projects all kinds of graphic images that appear to float in the air. An experimental programme that absolutely can’t be missed!

This price includes access to the concert as well as to the visit circuit on the day of the concert (before 4:15 p.m.)

Christmas in the Castle!
Under the direction of Thomas Hengelbrock

A festive journey through countries and periods, from Baroque masters to jazzy English and American Christmas carols.

At the court, when the sovereign appeared for an event, his entry was announced by trumpets and timpani. True to this tradition, the Christmas concert will open with festive brass bands. This will be followed by iconic Baroque works that combine singing and instrumental music. Finally, the “Brass Band” of the Balthasar Neumann ensemble will take classic Christmas carols and perform jazzy versions of them!

This price includes access to the concert as well as to the visit circuit on the day of the concert (before 4:15 p.m.)

Thomas Hengelbrock is the founder and director of the Balthasar Neumann Orchestra and Choir and one of the most renowned conductors of our time. Since 2005, he has repeatedly worked with orchestras in France – such as the National Orchestra of France and the Orchestre de Paris, and performs regularly at the Paris Opera (this 2021-2022 season, he conducted Iphigénie en Tauride by C.W. Gluck, Alcina by G.F. Händel and Faust by C. Gounod) as well as at the Théâtre des Champs-Élysées (where he will conduct Orphée et Eurydice by C.W. Gluck in 2022-2023). He is also the guest of some of the most prestigious groups and major international stages. (Vienna Philharmonic Orchestra, Bavarian Radio Symphony Orchestra, Royal Concertgebouw Orchestra of Amsterdam, Munich Philharmonic Orchestra) 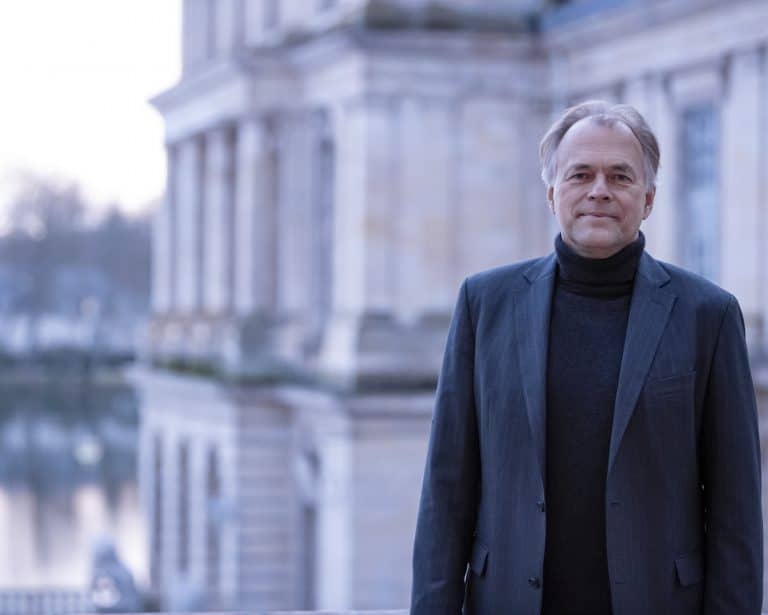 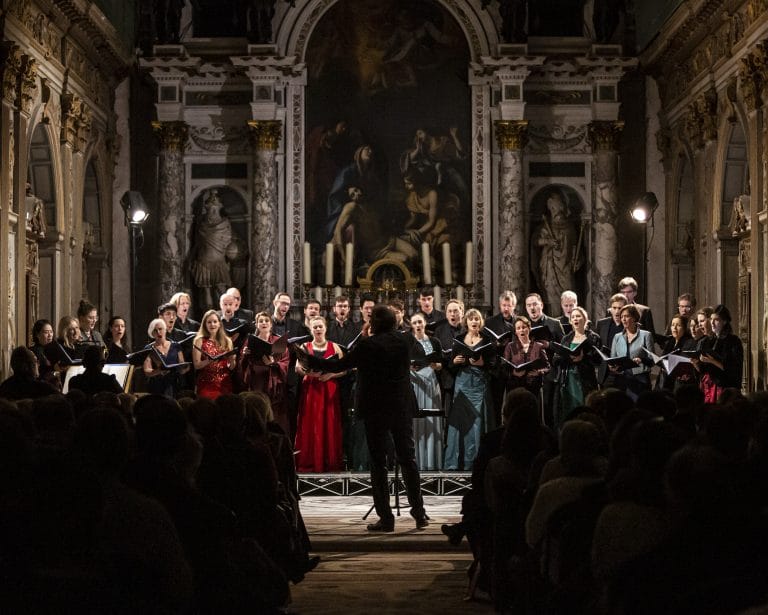 The ensembles perform regularly in some of the most prestigious theatres in France such as the Théâtre des Champs-Elysées and the Palais Garnier as well as major European concert halls and at renowned festivals – at the Festspielhaus in Baden-Baden, the Teatro Real de Madrid, the Konzerthaus in Dortmund, the Essen Philharmonie and at the Salzburg Festival.

Music at the Château de Fontainebleau

A centre of artistic production since the Renaissance

The Château de Fontainebleau has always resounded with music. To the traditional music that filled the daily lives of the sovereigns, many creations were added.

During the reign of Louis XV, The Village Soothsayer by Jean-Jacques Rousseau, Anacréon by Rameau, l’Amour et Psyché by Mondonville and Zémire et Azor by Grétry were performed in the Belle Cheminée wing.

In the 19th century, more works were presented to the Court, royal or imperial. In 1853-1854, Hector Lefuel’s construction of a new auditorium – the magnificent theatre of Napoleon III – provided a large-scale setting for musical festivities. Since 1921, with the initiative of Charles-Marie Widor, the Fontainebleau Schools of Music and Fine Arts have promoted the Bellifontaine musical tradition by organising masterclasses and concerts each summer. These have been conducted by Maurice Ravel, Igor Stravinsky, Nadia Boulanger, Arthur Rubinstein, Robert Casadesus, Léonard Bernstein, Philip Glass… 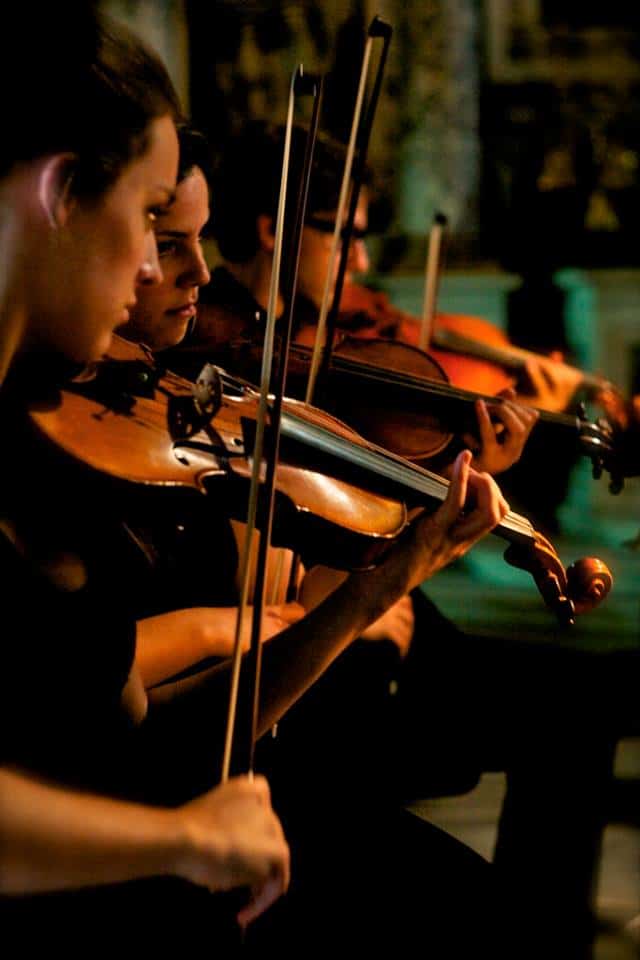 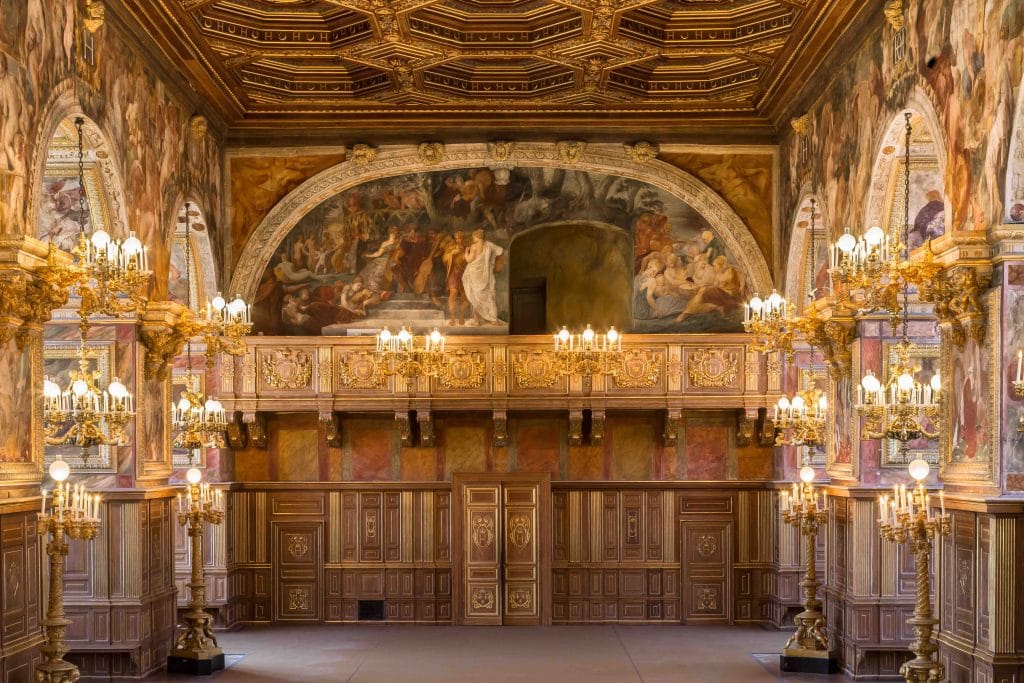 The splendid Salle de Bal is one of the most remarkable rooms in the Château de Fontainebleau.

Decorated in the 16th century during the reign of Henry II, it offered the palace a permanent and impressive function room dedicated to the festivities of the Valois court. The rich coffered ceiling is covered with lunar emblems and the king’s motto. As for the mythological frescoes, they were painted by Nicolo dell’Abbate under the direction of Primaticcio. Its gilded bronze chandeliers and sconces were completed in 1837 during the reign of Louis-Philippe.

Musical residency of Thomas Hengelbrock and the Balthasar Neumann ensembles

The Château de Fontainebleau intends for the arts to regain the place that they have occupied throughout its history, during the stays of the court. It will reconnect with its centuries-long tradition as a centre of artistic creation in a new and contemporary way. Giving free rein to the arts and placing them in dialogue with the rich history of Fontainebleau through a varied artistic programme, such is the project being carried out by the residency. The castle wished to entrust this for three years to the German conductor Thomas Hengelbrock and the Balthasar Neumann Choir and Ensemble. 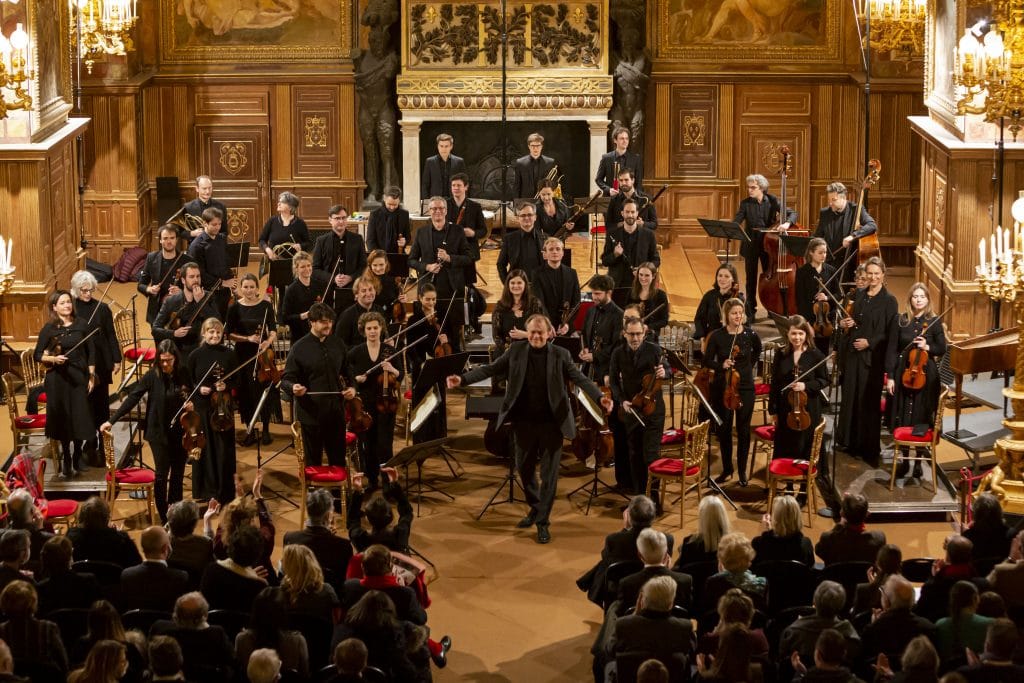 An educational and social project

This residency of internationally renowned artists has an important educational component: its masterclasses. This project brings together young talent from all over Europe to share their skills and passion. The residency is part of a dynamic of artistic and cultural education aimed at a wide variety of audiences. It is embodied particularly through the partnerships that have been established with the association Orchestre à l’École and with the Conservatoire de Fontainebleau.

Since the launch of the residency in October 2020, students from the Music Conservatory and both the orchestra of the Lycée François Ier de Fontainebleau and the Orchestre à l’École association have been attending rehearsals of the ensemble. They also interact with Maestro Hengelbrock and his ensembles to learn about musical practise, classical repertoire and instruments.
They benefit from the experience of internationally renowned musicians, and they participate in joint concerts, which are the results of several months of work and meetings. Thomas Hengelbrock and his ensembles also give concerts in centres for people with disabilities, hospitals and social care facilities, such as the Nelly Kopp retirement home last September or the Villa Alzheimer’s Centre Baucis in December. 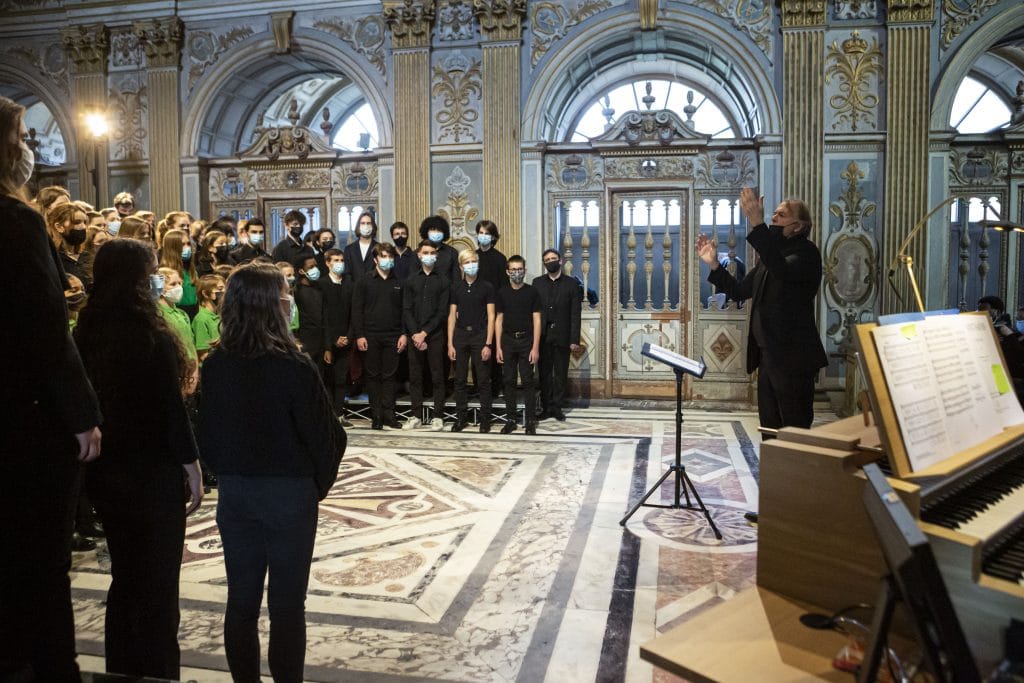 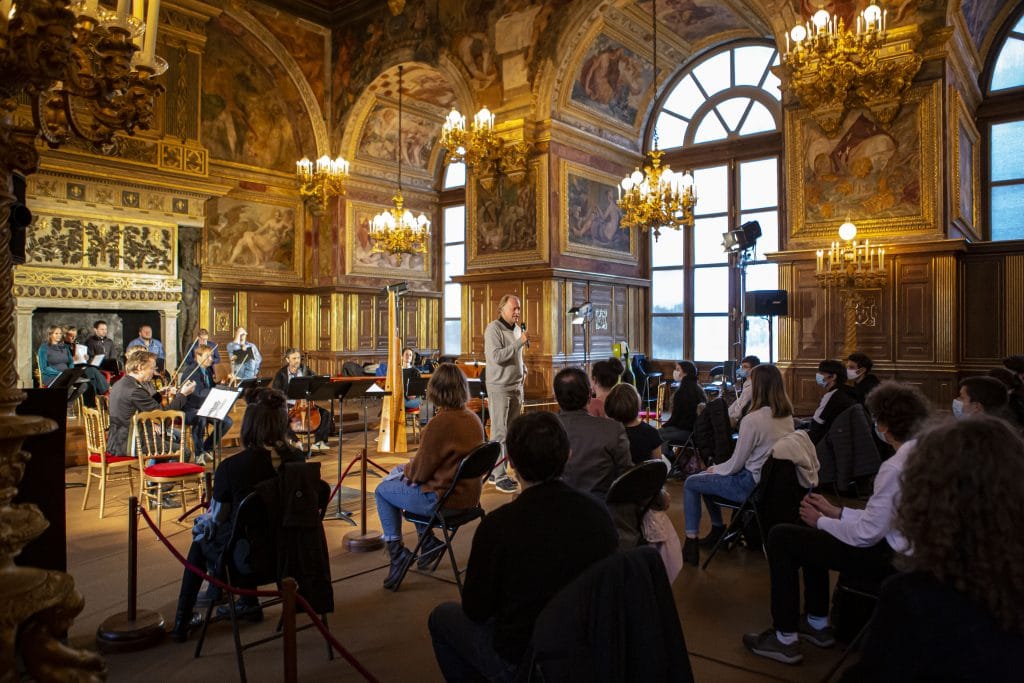 Sponsored by the Conny Maeva Foundation, with the support of Carigest 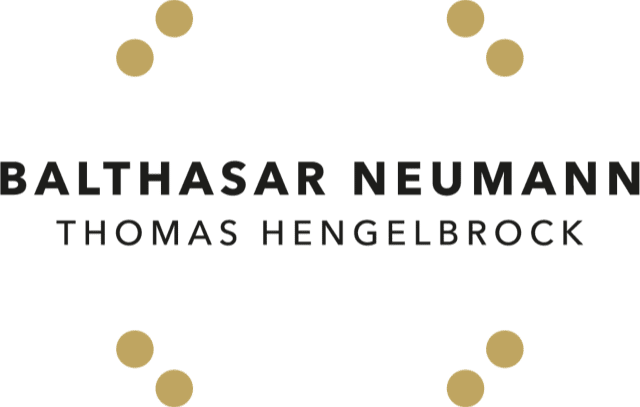 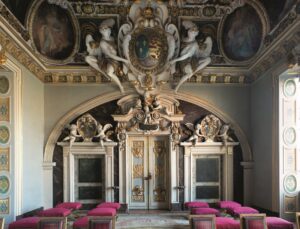 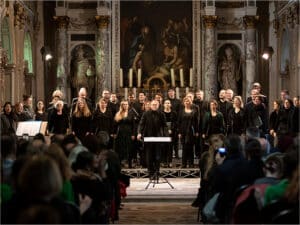