Allegory of Water, a masterpiece by Albano

The Château de Fontainebleau holds two paintings on copper in its collections by Francesco Albani, known as Albano (Bologna, 1578-1660), Cybele and the Seasons, or Allegory of the Earth, and Apollo and Mercury, or Allegory of Air, both loaned by the Louvre Museum in 1875. 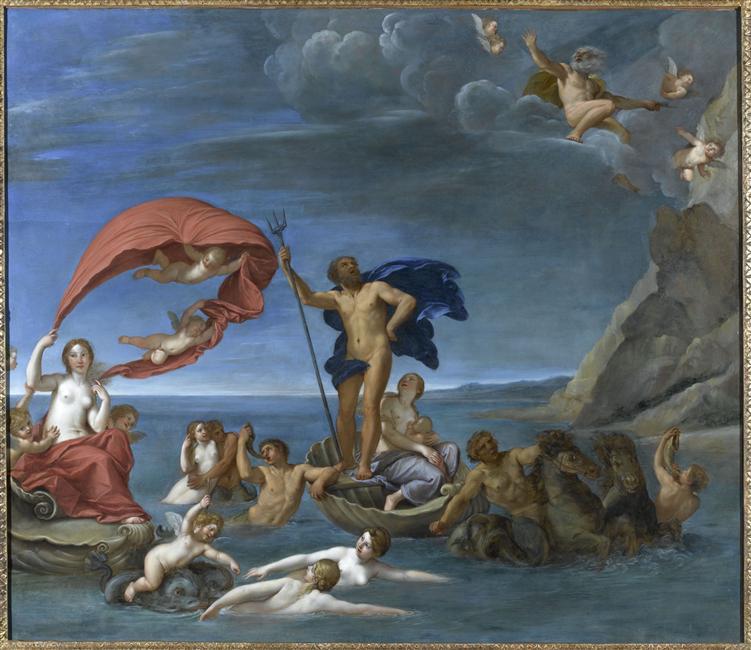 These two works of exceptional quality were painted by Albano for Jacques Le Veneur, Count of Carrouges, a French art connoisseur who was a close friend of the artist and godfather to his second son in Bologna, in 1625. At the death of Jacques Le Veneur in 1653, the three paintings by Albano appeared in the gallery of the Château de Carrouges (Orne), which he had acquired in 1634: in addition to the two works currently held in Fontainebleau, there was Neptune and Amphitrite, or Allegory of Water. The first two, Cybele and the Seasons and Apollo and Mercury, later entered the collection of André Le Nôtre who gave them to the king with part of his collection in 1693.

Remaining in the royal collections until the Revolution, they then were moved to the Louvre Museum where they were exhibited from 1816 onwards before being loaned to Fontainebleau. Neptune and Amphitrite, the third painting, had a very different fate. Inventoried with the two other paintings at Carrouges in 1653, it did not reappear until nearly a century later in the collection of Jacques-Antoine Crozat, the Marquis of Thugny, who died in 1751. It was then passed on to Pierre-Louis-Paul Randon de Boisset, an equally illustrious Parisian art connoisseur, and, when it was sold after his death (1777), it was acquired by the Count of Antoine-Jean-Baptiste Dutartre, who kept it until his death in 1804: it was then considered ‘[the] richest and most graceful composition known by this amiable painter’. Purchased in 1805 by the merchant Lafontaine on behalf of Lucien Bonaparte, the brother of Emperor Napoleon I, it came into the possession of King William II of the Netherlands in the 19th century and then passed through various English collections.

Having remained inaccessible for a long time, Neptune and Amphitrite by Albano reappeared at Christie’s in London on the 29th of October 1999. Acquired by an American collector, it was put up for sale again in 2008 and declared a ‘work of major heritage interest’ paving the way for its return to France and its inclusion in the national collections.

Put up for sale at a price of €1,380,390, the Château was able to acquire this exceptional painting thanks to the generosity of corporate patrons, as well as the Heritage Fund of the French Ministry of Culture.

This is how, after having been separated for three and a half centuries, the three paintings on copper by Albano were finally reunited.

The Château de Fontainebleau extends its warmest thanks to the companies that contributed to its acquisition.