A Coach Ride at Fontainebleau 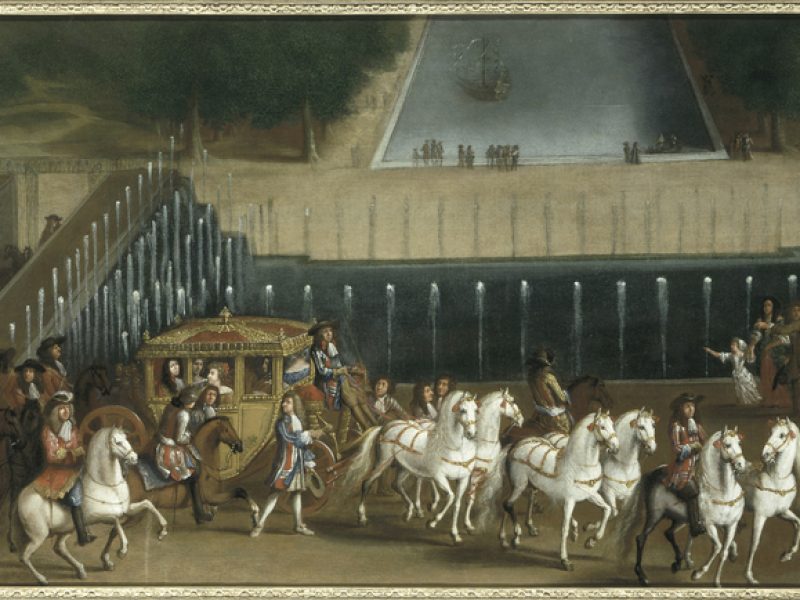 A carriage is pulled by four white horses across the garden of Fontainebleau carrying some noteworthy people, sometimes said to be Monsieur, the King’s brother and his second wife Princess Palatine. The company is enjoying the cooling jets of water and view afforded by the vast landscape that extends beyond the canvas. In the distance, people are admiring a boat sailing on the canal. It is perhaps the star piece of one of Louis XIV and his court’s much loved nautical entertainment shows. Anne of Austria had already brought in the famous André le Nôtre to work on the Queen’s Garden (now the Jardin de Diane). He designed the garden in the French formal style with its boxwood ‘Parterre de Broderies’ (embroidery-like patterns) spelling out the initials of the king and queen during the reign of Louis XIV. He also built a breeding ground for deer and the Cascades Basin in front of the Grand Canal which can be seen in the painting. Water pursuits were a particularly popular source of entertainment for Louis XIV and his court. The king had a large “flotilla”, consisting of many miniature boats that could sail on the pond and the canal. He was particularly fond of gondola rides. This type of boat from the Venetian lagoons was so fashionable and popular in France that Venetian carpenters and gondoliers were sent to the court to make gondolas for the court’s entertainment.

Other paintings
All collections