A collection of French Empire porcelain

Launched in September 2016 by the château de Fontainebleau in partnership with the Galerie Aveline and Camille Leprince, the ‘Sèvres for Fontainebleau’ subscription made it possible to acquire 4 sets from the Manufacture Impériale de Sèvres, which have been designated as a ‘National Treasure’.
Intended for the Imperial family and to furnish the Imperial palaces, as diplomatic gifts or New Year's gifts from the Emperor and Empress, these pieces complete the remarkable collection of Sèvres porcelain already housed in the Napoleon I Museum.
To raise the funds needed for their acquisition (€1.1 million), the Château enjoyed the support of a large number of patrons (€600,000), as well as financial backing from the State (€500,000). 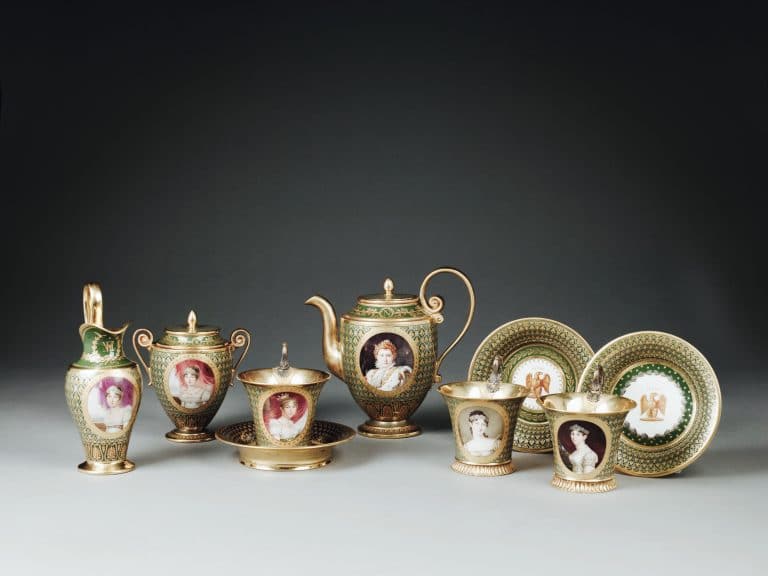 Given in 1813 by Empress Marie-Louise to her mother-in-law, Letizia Bonaparte, this set features a unique iconographic collection. The teapot bears the effigy of the imperial couple. The sugar bowl is adorned with portraits of the King of Rome and his godmother Caroline, Queen of Naples. The milk jug honours Elisa, Grand Duchess of Tuscany, while the cups are decorated with portraits of the ‘princesses’: Hortense, the wife of Louis, Pauline, the wife of Prince Camille Borghese, and Catherine of Württemberg who became Queen of Westphalia by marriage to Jerome.

A vase decorated with a portrait of Caesar

This ‘fuseau’ vase is part of a pair intended to decorate the former pontifical residence of Quirinal, which became the imperial palace of Monte Cavallo in annexed Rome, ‘the second capital of the French Empire’ and prefecture of the French department of Tiber. The vase acquired by Fontainebleau features a figure of Julius Caesar. Its counterpart, with the figure of Augustus, has yet to be acquired. 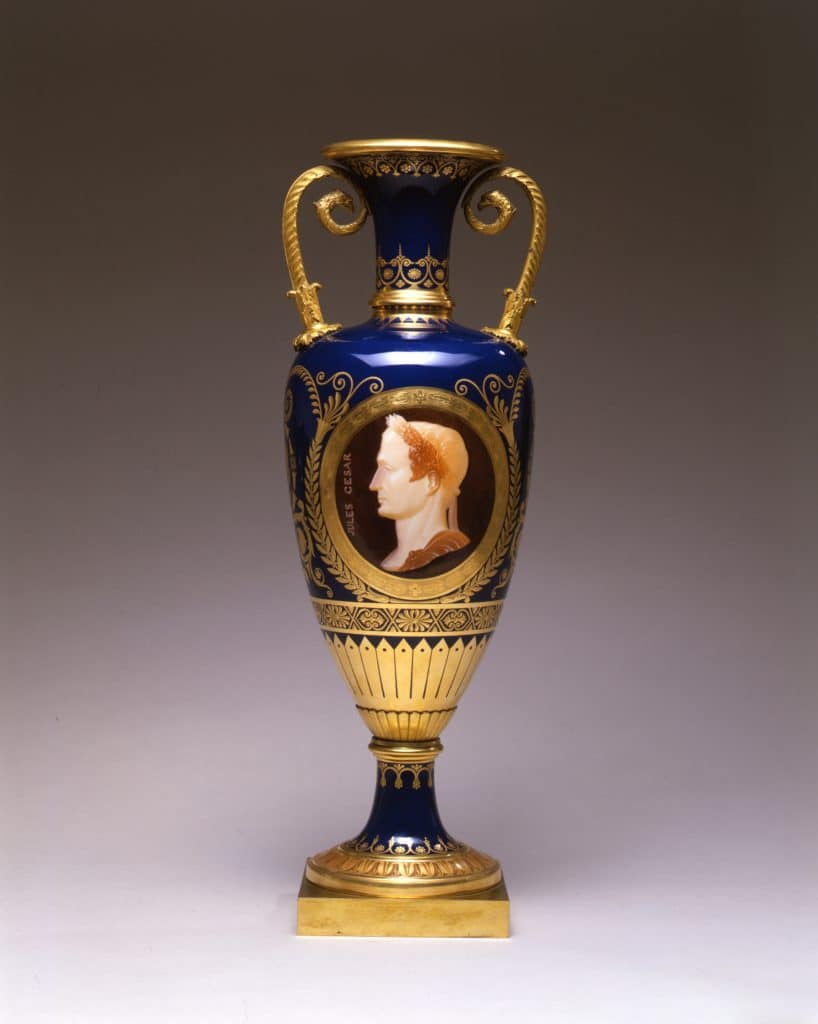 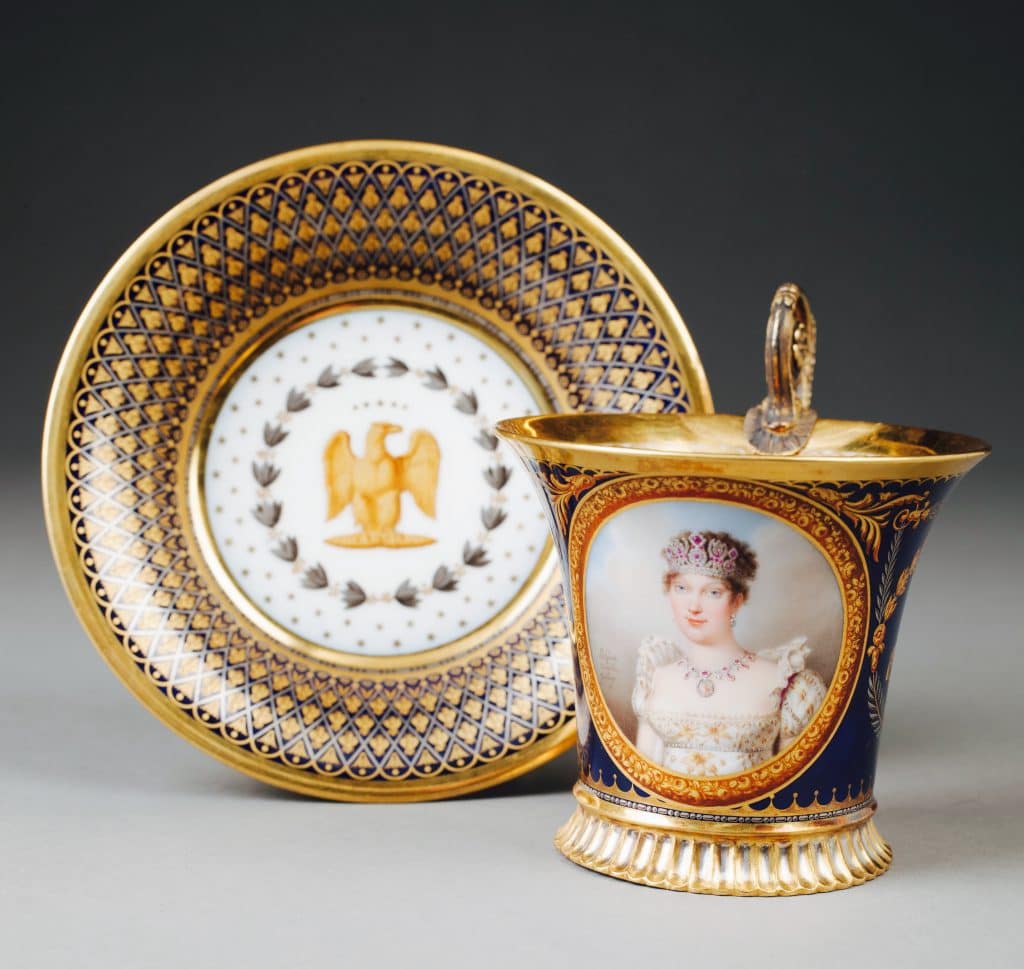 Marie-Louise’s gifts to her chamber women

New Year’s gifts from the Manufacture de Sèvres were offered by the Empress to her most faithful followers. In 1812, the Duchess of Montebello received a cup with a portrait of the Empress in full regalia and its saucer bearing the imperial eagle. As for the Countess of Montalivet, she received a semi-circular bowl depicting a horse race at the Champ-de-Mars, painted by Swebach.

The Napoleon I Museum’s ‘Hall of Splendours of the Imperial Table’, known for its display of the Grand Vermeil that the city of Paris gifted to the Emperor for his wedding and the special porcelain service, will be enriched with four plates intended for the two imperial palaces of the Tuileries and Fontainebleau.

Two plates, painted by Jean Georget, representing Mercury and Psyche, and Venus wounded in a hunt carried by Adonis, belonged to the Olympic service. Their shapes, described by the Manufacture de Sèvres as ‘new, elegant and rich’, adorned the table at the Tuileries for the wedding of Jerome and Catherine of Württemberg in 1807. This Olympic service was then given to Tsar Alexander I of Russia. Two other plates belong to the ‘Marly Rouge, Butterfly and Flowers’ service, Fontainebleau’s second service, which adorned the imperial table from October 1809. The Château de Fontainebleau is, understandably, working to reconstitute this service, seven pieces of which have already been reunited.

Four plates from the ‘Marly d’Or’ service bear witness to Napoleon’s hold on Europe and the neoclassical cultural context. This service, produced in Sèvres from 1805 onwards, had a very large number of plates available for occasional gifts. Two of the plates acquired by Fontainebleau are adorned with topographical views, relating to Napoleon’s domination of Germanic lands: the View of Boppard on the banks of the Rhine and a Waterfall in Napoleonshöhe Park. The other two plates highlight the weight of Antiquity in these times of neoclassicism, both as a living culture and as a model to be equalled. One represents a Sacrifice to Aesculapius, and the other Education. 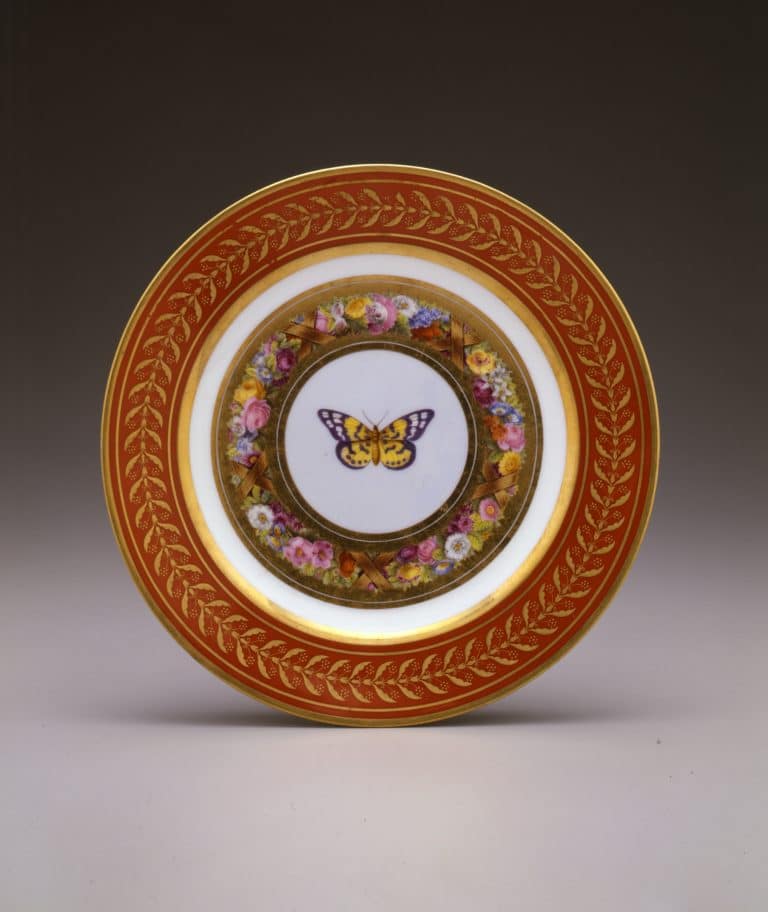 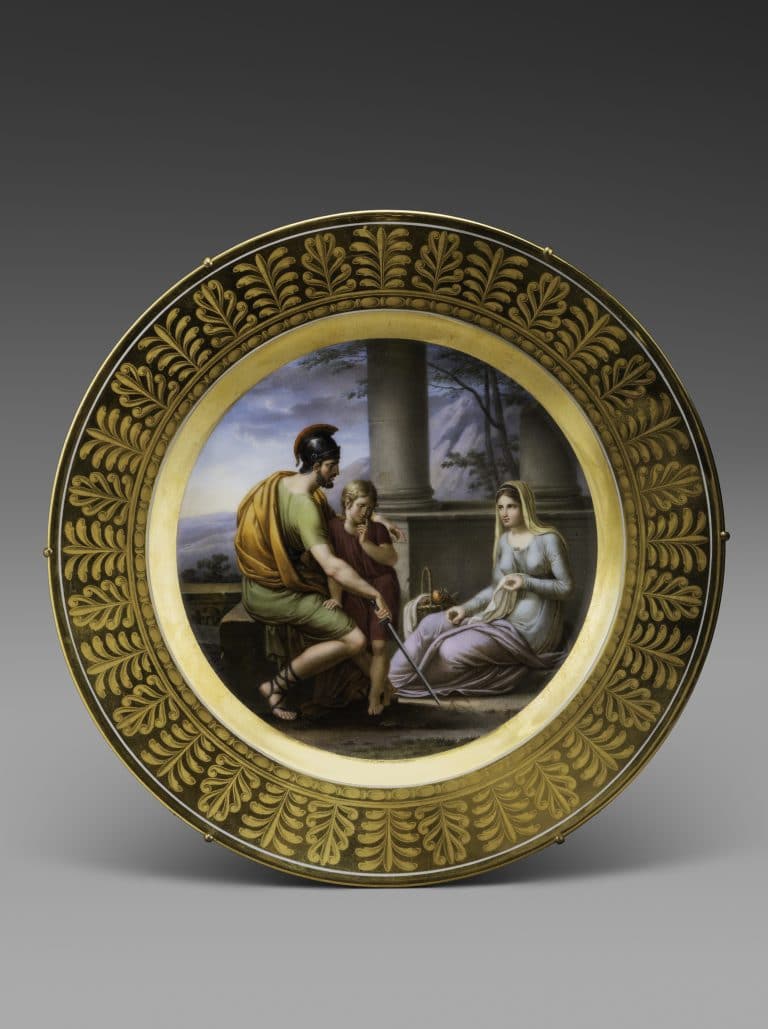 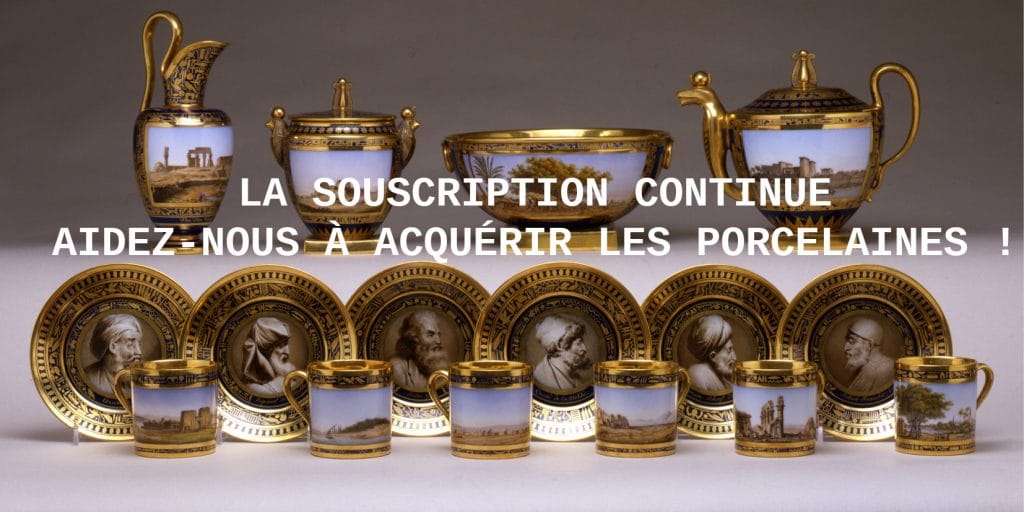