Basket and Vase of Flowers 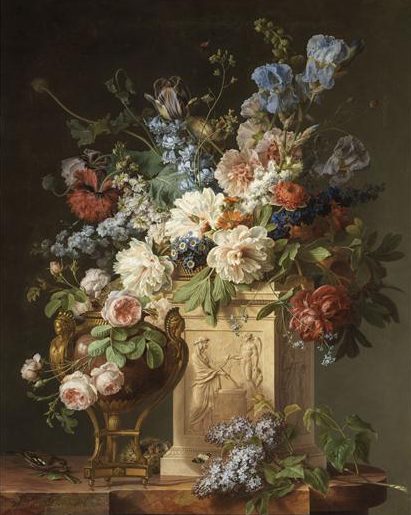 This painting was first presented at the Salon of 1785 and personally acquired by King Louis XVI. Gérard Van Spaendonck was a painter from Brabant who moved to Paris in 1769 where he began an official career as a miniaturist. He was a painter of flowers who, with his pupil Redouté, would exert the greatest influence on the following generations. Professor of “natural iconography” at the Museum from 1793 to 1822, he taught an art of painting flowers that borrowed heavily from the Nordic tradition epitomised by Van Huysum and De Heem. The reflection of the window in the bronze vase and the delicate dewdrops appear here as some of the many tributes to ‘llusionism’ and the trompe-l’oeil style indicative of Flemish painters. Van Spaendonck modernizes the scene by setting the painting on a large diagonal that goes from the cabbage roses at the bottom left to the other end of the painting. As the King’s vellum painter at the Museum, Van Spaendonck was able to meet Buffon and combine his talent with the botanist’s knowledge. This explains the great variety of species represented in his canvases. Here we see a melange of simple garden flowers such as marigolds and forget-me-nots with more vivacious specimens such as large peonies, poppies and hyacinths. The butterfly is resting on a lilac branch, a ladybird and a goldfinch are carrying worms to their nest to feed its young. This is all a reminder of the place the living world has in this inanimate universe.

Other paintings
All collections