Fontainebleau in the Age of Enlightenment

In the 18th century, Fontainebleau was where hunting parties and entertainments continued to take place in a more intimate and relaxed court setting. Every autumn, King Louis XV, who was particularly attached to the house of his ancestors, organised a sumptuous opera season at Fontainebleau with a succession of musical and theatrical entertainment and epic hunts. The Intendant of the “Menus Plaisirs du roi” (lesser pleasures of the King), Papillon de La Ferté, was in charge of all the preparations for events and festivities at Fontainebleau: operas such as The Fairy Urgèle, Eglé, Palmira, and Zémire and Azor by Grétry, resurrected the fairy which had so delighted Francis I in this forested valley. While the Fontainebleau of Louis XV was a haven of pleasure, the château where he married Marie Leszczyńska on 5 September 1725, was also also a place of deep sorrow and aborted grand architectural projects… In 1724, during the young king’s first visit – with the Infante Mariana Victoria of Spain – building work started on a new theatre, in the Belle-Cheminée wing, heralding a reign typified by entertainment, operas and pleasure.

The King, who was 15, returned to Fontainebleau the following year to marry the Polish princess Marie Leszczyńska, who was 6 years older than him. The only royal wedding to be celebrated at the château took place on 5 September 1725. Diarists at the time recounted that the Queen, "in all her finery", almost fainted under the weight of her jewel-encrusted regalia. A banquet was held in her antechamber, comedies by Molière were performed and supper was held in the Ballroom. The three days of official festivities, attended by the young Voltaire, ended with a firework display. The marriage ceremony, celebrated in the Chapel of the Trinity, was undoubtedly the most important event to take place at Fontainebleau in the 18th century. That same year, five Native Americans were received by Louis XV at Fontainebleau and were charmed to discover "the cabin of the Grand Chief of the French". Les Indes Galantes opera (The Amorous Indies), by Jean-Philippe Rameau, apparently resonated with this happy time for Louis XV: "Quiet forests, never a vain desire troubles our hearts here".

For "the beloved King" Fontainebleau would always be where his happy wedding took place. He returned there nearly every autumn of his long reign, to pursue his passion for hunting. His interest in the royal residence was demonstrated, in the decades that followed, by the "Grand Project" to redesign and realign this apparently disparate collection of buildings in a classical style more in keeping with the taste of the time. 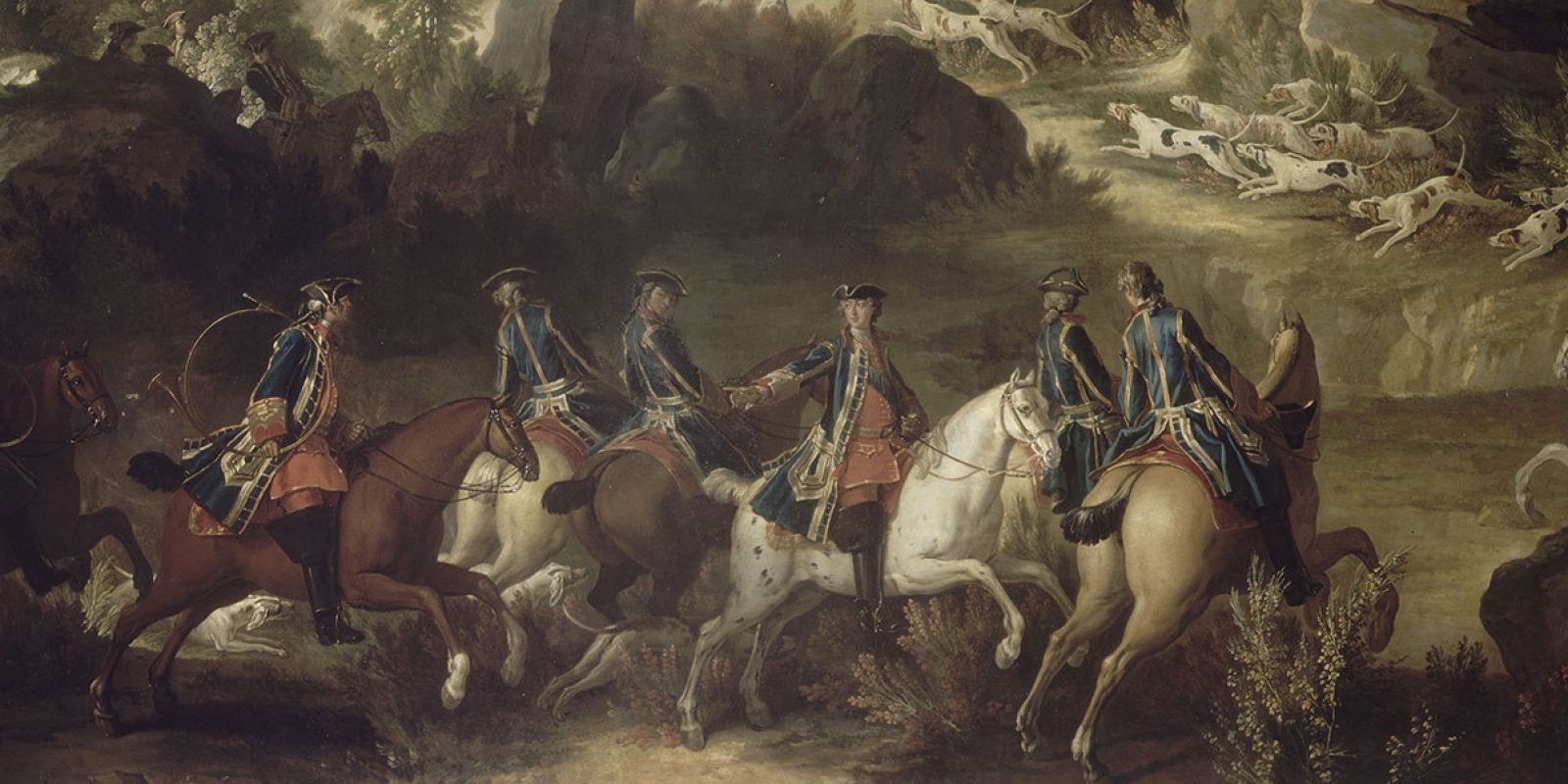 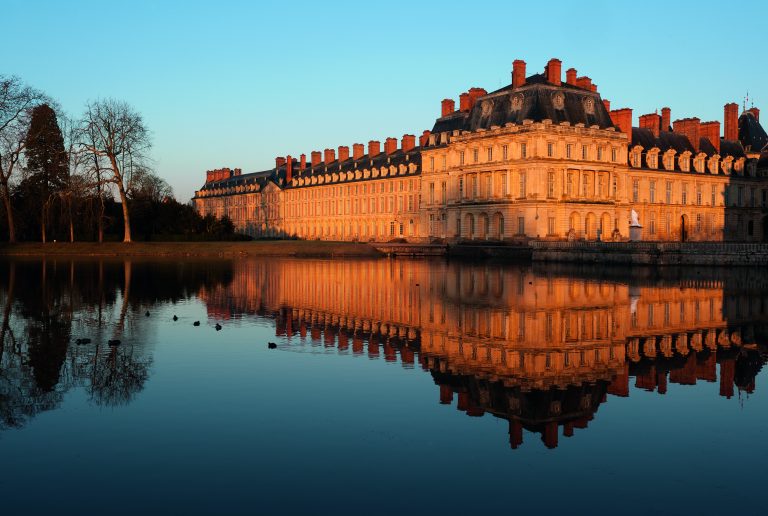 The reign of Louis XV saw the last large-scale architectural project for the château: Ange-Jacques Gabriel’s "grand design". Convinced of the superior aesthetics of their time, Louis XV and his architects attempted to imprint the elegance, nobility and good taste of French classicism on this ancient residence with its sometimes confusing architectural style. While the grand project to rebuild the White Horse Courtyard and move the Royal Apartments did not materialise, the major building work undertaken under Louis XV followed this design.

In the Fountain Courtyard, the square classical style Great Pavilion, with an upper floor, an attic storey with pilasters and an avant-corps (1750), replaced the small pavilions of Francis I. The plan to duplicate this style of Pavilion at the corners of the White Horse Courtyard, and to create a grand, classical entrance façade to the courtyard, never got off the ground. Only the wing of the Ulysses Gallery, where the masterpiece of Primaticcio and Nicolo Dell Abbate had been housed on its upper floor, since the 16th century, bore the brunt of this overhaul and was ruthlessly demolished in 1738. On its ruins, a "new princes’ wing” was built, now the Louis XV wing, intended to house 43 apartments. At the sight of the masons demolishing the famous Renaissance gallery, Count Algarotti lamented the disappearance of paintings from the 16th century "of such freshness, perspective and potent colours" which had captured the imagination of the greatest European artists. Louis XV's alleged "vandalism" at Fontainebleau should however be put in perspective: elsewhere in the château, Ange-Jacques Gabriel remained admirably respectful of the Renaissance designs, and the new stairs for the King to access his apartments via the Oval Courtyard, were built to blend in with the former bedchamber of the Duchess of Étampes, where a large part the décor by Primaticcio was kept…

Joys and sorrows of Louis XV at Fontainebleau

Throughout the 18th century, court life at Fontainebleau reached a peak of sophistication that fully justified Talleyrand's famously remark to Guizot that "Those who have not lived through the years around 1789 cannot know what is meant by the pleasure of life". As the monarch's theatre, Fontainebleau shone with endless festivities. The hunts, rides, games and shows were such during Court visits, that the famous Venetian adventurer, Giacomo Casanova, upon discovering the splendours and pleasures of this royal resort, noted: "Louis XV was followed by French and Italian actors and his performers from the Opera. During these six weeks, Fontainebleau shone much more brightly than Versailles". Jean-Jacques Rousseau’s opera The Village Soothsayer premièred here in the presence of its author, on 18 October 1752. In 1754, the theatre was renovated. It underwent a major refurbishment and was modernised in line with contemporary château décor. In 1763, there was a Rameau revival and Dardanus and Castor and Pollux were performed. Created at Fontainebleau on 9 November 1771, Grétry’s comedy Zémire and Azor, was a huge success. 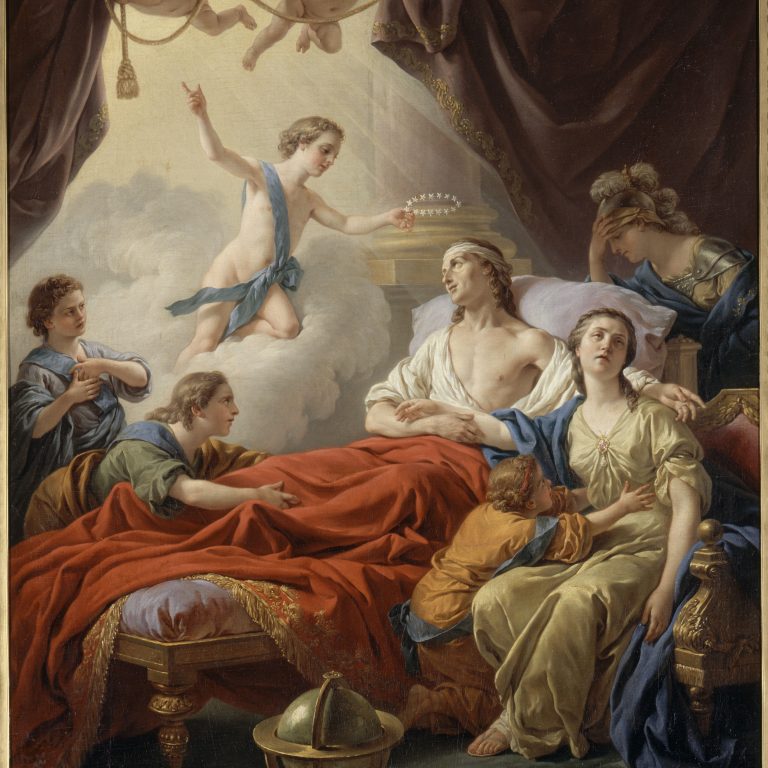 While the château of Louis XV is remembered today as a splendid château from the Age of Enlightenment, filled with music and operas, it was also the stage for an intimate tragedy for the monarch. In December 1765, his visit to Fontainebleau had to be extended: the Dauphin Louis, who was 36 and had been suffering from fever for several months, died on 20 December in his apartment in the Oval Courtyard. The man who should have been Louis XVI left behind him three orphans, who were to become the last three Kings of France: Louis XVI, Louis XVIII and Charles X.