Fontainebleau is above all a royal home, a dwelling with a succession of stairs leading to the first floor, guard rooms and antechambers gradually gaining access to the monarch. In this way it is a reflection of the etiquette which governed court life. Testifying to several centuries of artistic expression commissioned by various monarchs, the apartments are split into two parts: “the King's apartment” and “the Queen's apartment“. 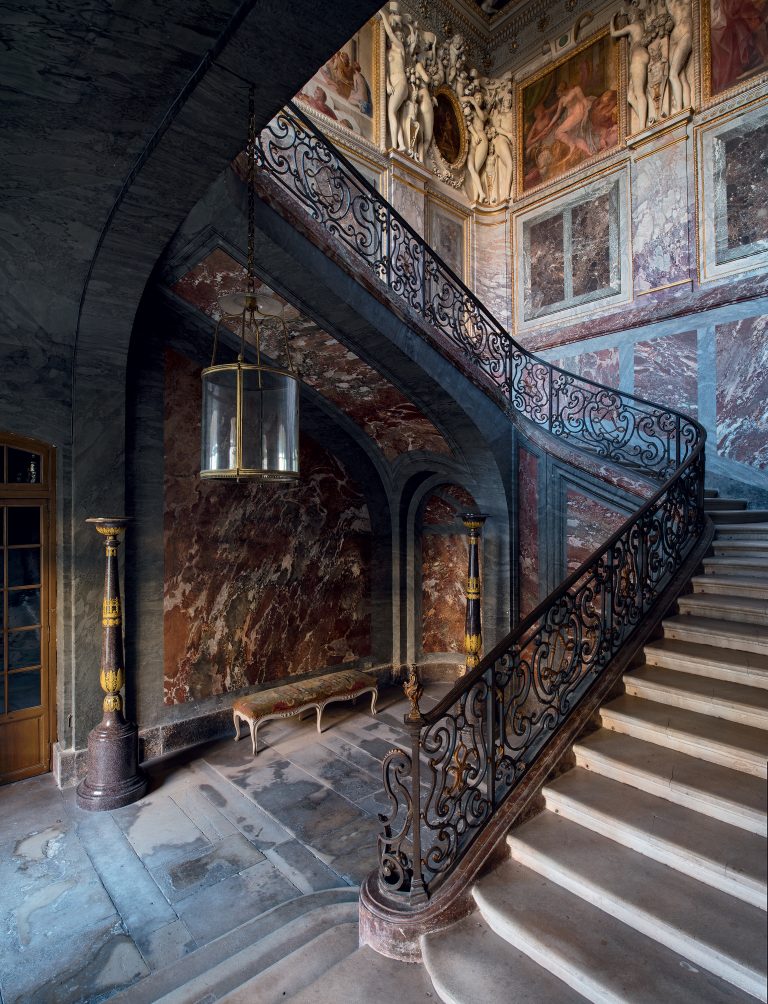 The entrance to the King's apartment

With access from the Oval Courtyard, the current staircase for the King's apartment was built under Louis XV, near a 16th century staircase which had become too narrow. Designed by Gabriel, this grand staircase with a wrought iron banister, in which the sovereign's initials can clearly be seen, allowed the King to access the first floor known as the "Bel Étage" of the palace. With higher and wider windows, the "Bel Étage" contains reception rooms distinguished by high ceilings, more light and remarkably sumptuous ornamentation. The staircase designed by Gabriel was built, in 1748-49, in the former bedchamber of the Duchess of Étampes: the majestic and sensual elegance of large stucco female figures, vestiges of the 16th century bedchamber, and the frescoes by Primaticcio devoted to Alexander the Great, formed the monarch's entrance to his "Home".
From the landing, the staircase gives way to a succession of antechambers and studies, leading to the King's bedchamber.

This vast room was for the king’s guards, who watched over the entrance to the monarch's apartment. All that remains, today, is the French ceiling and, at the top of the walls, a frieze depicting military trophies and armour painted in oil.
In the 19th century, under the reign of Louis-Philippe, this originally antiquated room was transformed into a majestic reception room overflowing with initials, ornaments, emblems and mottoes paying tribute to monarchs of the past.
Decorated with a marble fireplace featuring a bust ofHenri IV and marquetry flooring reflecting the layout of the ceiling, the room would eventually become a state dining room for Napoleon III. 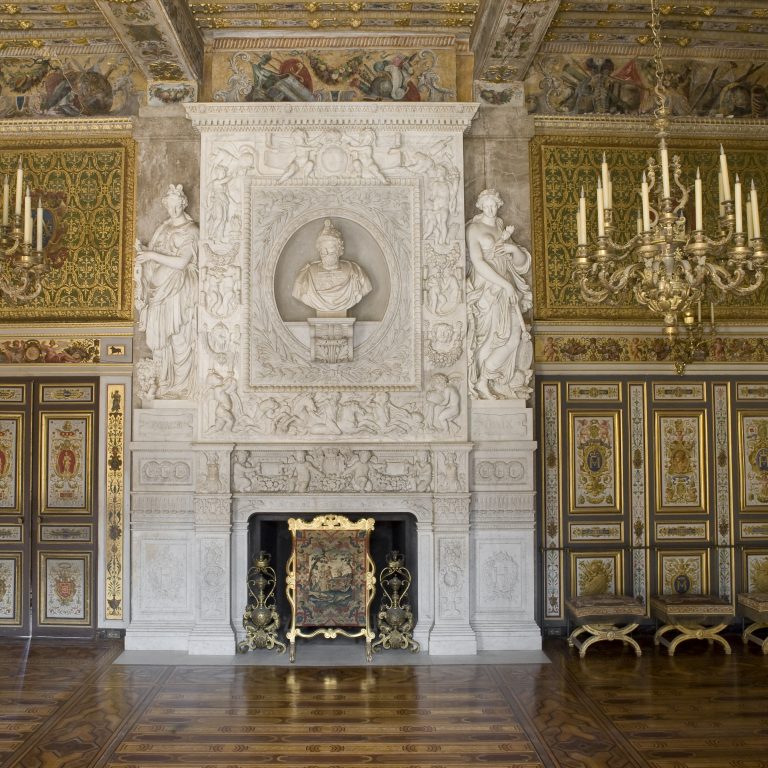 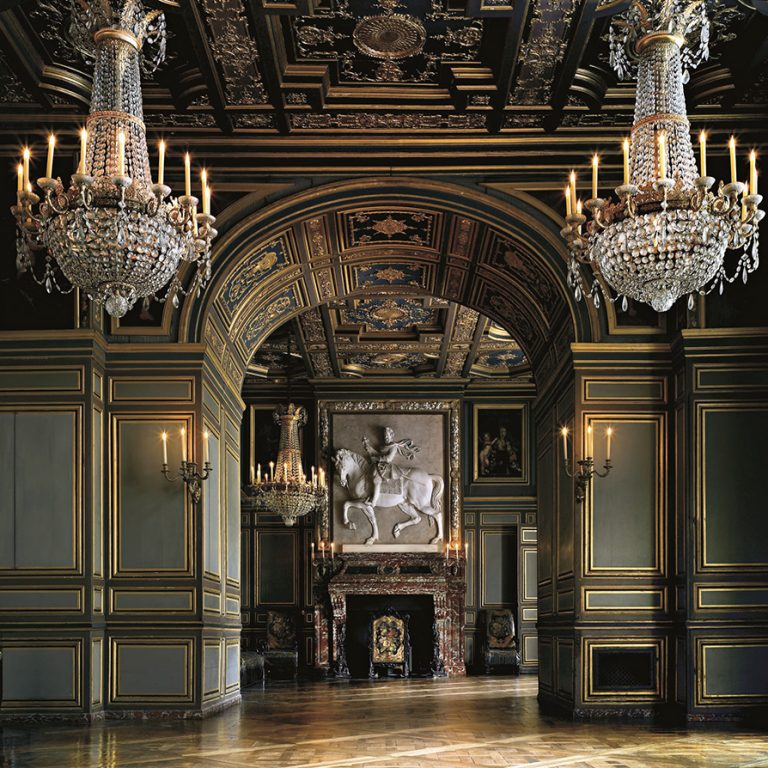 By their very name these two rooms evoke the memory of the most famous monarch of the Middle Ages: Louis IX, known as Saint Louis. Since the Middle Ages, the King's bedchamber had been in the second room, lodged in the thick old wall of the keep. When the bedchamber was moved in the 17th century, this room was downgraded to an antechamber, a separate, spacious room furnished with benches, where people waited to be introduced to the monarch.
On the other side of the arch, the marble bas-relief of King Henri IV on horseback by Mathieu Jacquet, a vestige of a monumental fireplace from the late 16th century, was installed at the entrance to the King's apartment at the request of Louis-Philippe, who thus paid tribute to his ancestor, "the most beloved of kings".

Like a delicate casket inlaid with precious paintings, the Louis XIII Salon was formerly the "grand cabinet du Roi". The sumptuousness of this room is explained by the fact that it always adjoined the King’s bedchamber, accessed by the large doors at the back. It was under the reign of Henri IV that it was decorated with panelling and wood carving with small doors concealed in the woodwork. Ambroise Dubois, painter to Queen Marie de Medici, painted fifteen canvas panels recessed in stucco borders, depicting the story of the lovers Theagenes and Chariclea. The meticulous way in which the room was decorated also speaks of a desire to be commemorated: it was in this room that Marie de Medici, lying in a large crimson velvet bed, gave birth, on 27 September 1601, to the Dauphin, the future Louis XIII. 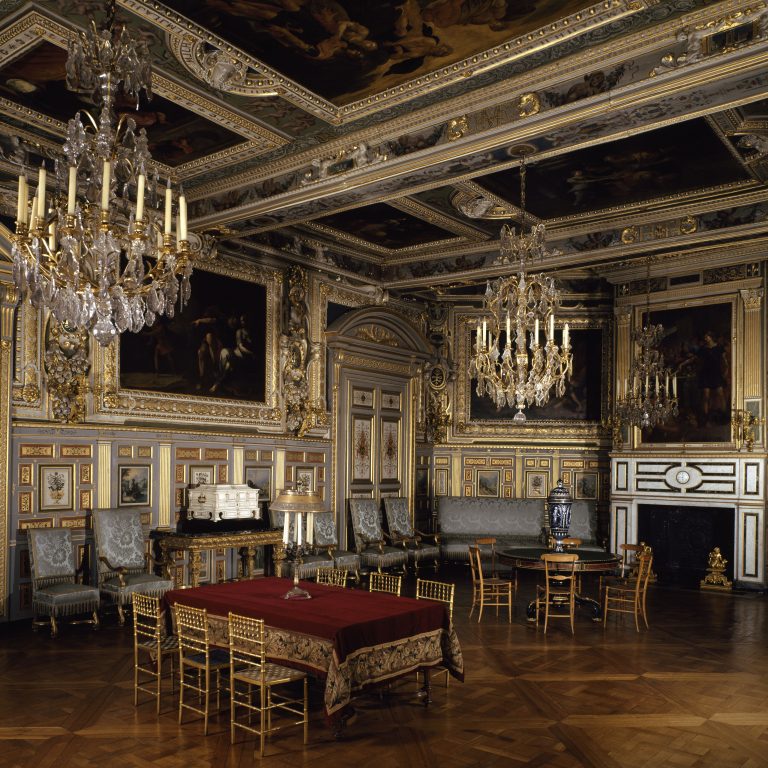 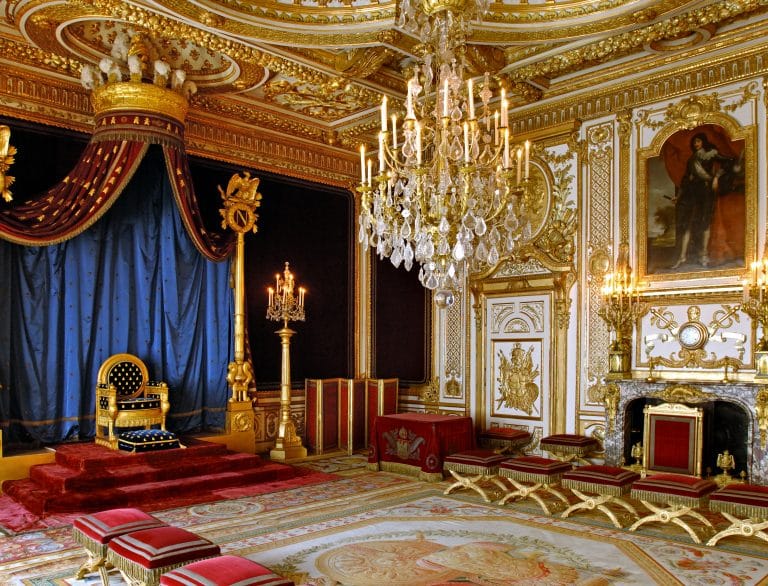 The King’s bedchamber no longer looks like it did in the Ancien Régime: after the Revolution, in 1808, Napoleon I turned it into a Throne room, which was used until the Second Empire.
What remains, however, of the royal bedchamber which was the heart of the palace, is the panelling, marble fireplace with sumptuous gilt bronze ornamentation and carved gilded medallions bearing the motto of Louis XIII. Emptied of its furniture, bed and balustrade during the Revolution, this former beating heart of court ritual, where the monarch's public getting-up and going-to-bed ceremonies took place, is today the last remaining Napoleonic throne room in existence.
Indeed, the throne took the place of the bed in the alcove. The purple dais with its golden bee motif is an impressive setting representing Napoleonic symbolism: an imperial cypher, eagles from antiquity and laurel crowns reflect Napoleon’s desire to display, using heraldic language, his power at the very core of the "house of ages".

The Queen’s apartment closely resembles the King's apartment with a very similar layout: the Queen had her own staircase leading to the Oval Courtyard, created in 1768. On the first floor of the Château de Fontainebleau, the Queen's apartment looks out, to the north, over the side of her private garden (now the Diana Garden). Like the King’s apartment, it consists of antechambers and comfortable reception rooms leading to the state bedchamber. 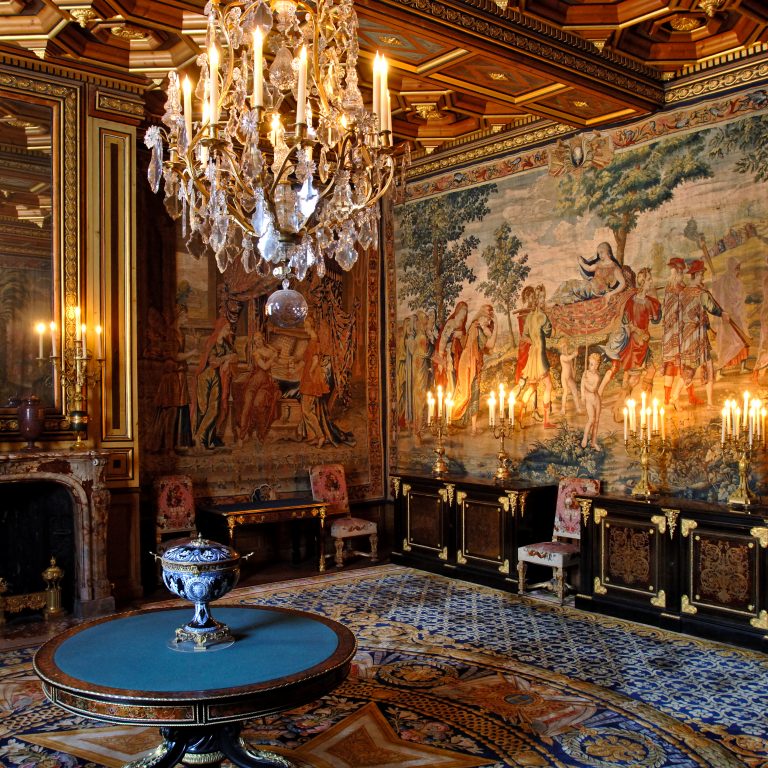 This room was formerly the Queen's guard room, before being turned into an antechamber. With a more relaxed etiquette in the 19th century, the old anterooms in the apartment lost some of their austerity to become sumptuous, comfortable reception rooms. The Tapestry room was indeed fully refurbished in 1835 under the reign of the last king of Fontainebleau, Louis Philippe I, and a beautiful wooden coffered ceiling was installed. The new drawing room was furnished, by Louis-Philippe, with "family tables" around which the King, Queen and princesses gathered. King Louis-Philippe took great pleasure in seeing his family gathered around him and savoured the beauty of the ancient artworks. A history buff, he filled the room with antique furniture that he loved, such as luxurious Boulle inlay pieces from the 17th centuryand antique tapestries embellished with gold from the early 17th century, depicting the significant episodes from the myth of Psyche.

The Francis I salon

This room was, in the 16th century, the bedroom of Queen Eleanor of Austria, the wife of Francis I. When the Queen's bedchamber was moved in the 17Ith century, it became the "the Queen's second antechamber". This is where courtiers waited to be able to access the room to attend the Queen's "getting-up" and "going-to-bed" rituals. In the Renaissance, this illustrious room had been decorated by Primaticcio. All that remains of its décor featuring stucco and frescoes is the fireplace, a large square block whose central motif, on the hood, features a painted medallion depicting Venus and Adonis. The fireplace was much admired over the centuries that followed and gave the room a "Renaissance" feel. In 1865, under the reign of Napoleon III, the salon was was given the finishing touch with five Gobelins tapestries, made at the late 17th century after a Flemish tapestry from the Renaissance: The Hunts of the Emperor Maximilian, the grandfather of the former occupant these rooms, Queen Eleanor. 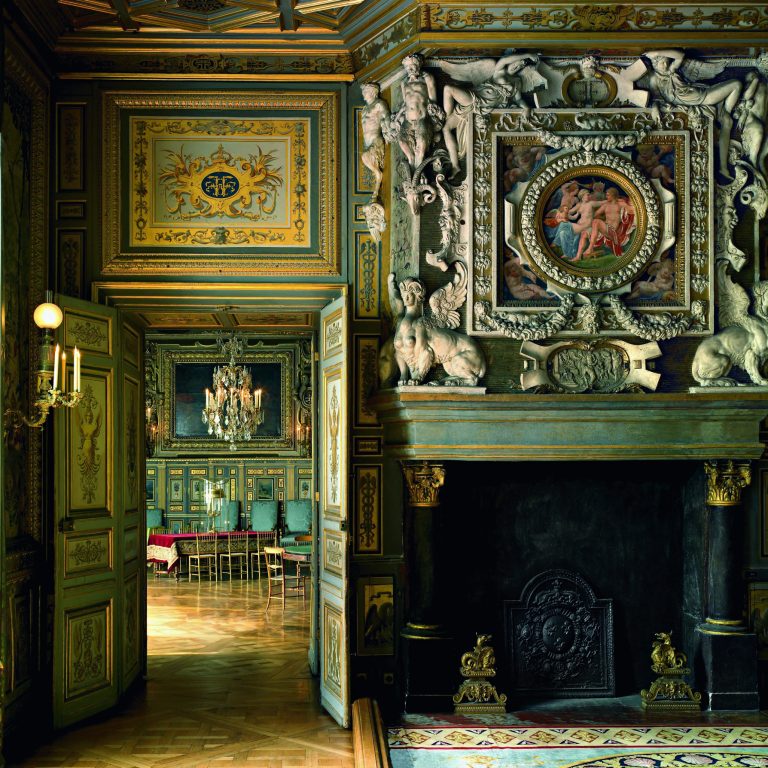 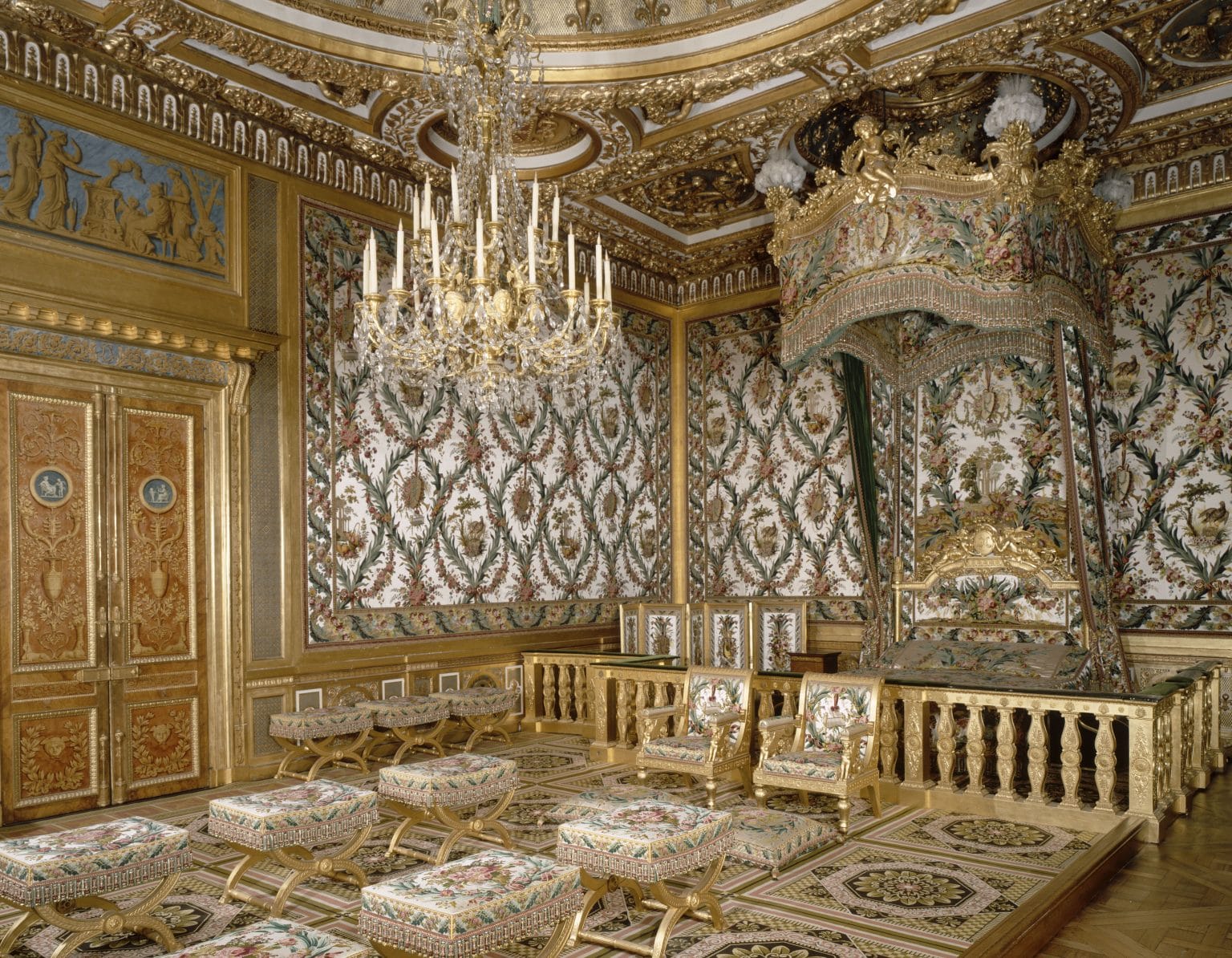 Former bedroom of the queens of France, it was used by all the kings’ wives one after the other, from Marie de Medici to Marie Antoinette. The immense bed dates from Marie-Antoinette. On its headboard, flanked by quivers, cupids support a medallion featuring her initials. Overlooking a beautifully carved dais, a cupid plays on the front, surrounded by flowers. The bed, separated from the rest of the room by a carved gilded wooden balustrade, is a reminder that this bedchamber is a "ceremonial" room where the monarch’s private space is separated from the public space of the courtiers. The bed was only delivered to the queen in 1787 and Marie-Antoinette never had the opportunity to sleep there. It was the Empress Josephine who, after the Revolution, christened this bed and softened the walls of her bedchamber with precious silk fabrics from the late 18th century, filling the room with a profusion of flowers, pastoral musical instruments, cages, flower baskets and partridges with their young. An abundance of fertility systems recalling a queen's primary purpose: to produce an heir for France.

Marie Antoinette liked to "bouder" or sulk about court pageantry and withdraw to this small boudoir with its exceptionally refined décor. A range of ornamental vocabulary is used on the panelling surrounding the room, on a brilliant silver or gold background. The atmosphere is feminine: above gilded doors, plaster figurines depict the Muses grouped in pairs. On the ceiling, a trompe-l’œil sky featuring Aurora with her coterie of cupids overlooks a gilt and silvered bronze bureau inlaid with mother-of-pearl, which adds a particularly sophisticated touch to this secluded setting. The bathtub that can be seen behind the arch was added in the 19th century by a fervent admirer of Marie Antoinette, the Empress Eugenie, who liked to relax in the privacy of this historical décor. This is how she escaped the French court where she felt like "the first slave of the kingdom, isolated yet surrounded by people, without a friend (…) and never alone for a moment". 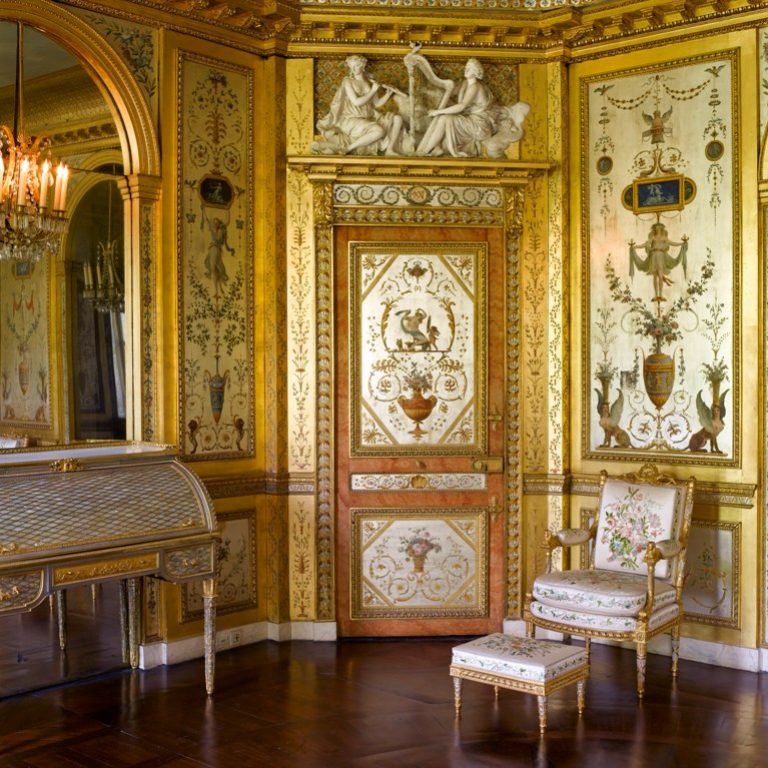 Wearing a mask is compulsory from the age of 11.

The tour is fully accessible, except for the Napoleon I and Chinese museums. As a compensation, the exit is through the Oval Court, exceptionally open for the occasion.

It is not necessary to reserve a visit slot for the castle or the gardens.

Coming to the castle