From Louis XVI to the French Revolution

During their relatively short stays at Fontainebleau, Louis XVI and Marie-Antoinette created, far from the pomp of Versailles and Trianon, secluded spaces to get away from it all, more intimate and modern, more in line with the taste of that era. While Marie Antoinette’s two boudoirs allowed her to “bouder” or sulk, away from court pageantry, Louis XVI’s apartments, on the first and ground floor, were more suitable for a modern sovereign. The refurbishment works at Fontainebleau were put on hold when the French Revolution broke out in 1789. The large bed in the Queen’s bedchamber, delivered in 1787 for Marie Antoinette, had to wait 17 years before a queen lay down under its richly adorned canopy. And while the palace of the kings of France was due to be demolished during the French Revolution, it owes its survival to two schools being set up in its rooms emptied of their furniture. The dilapidated château was only saved from total destruction in 1803, during the first visit of the one who was to return it to its former glory: Napoleon Bonaparte. 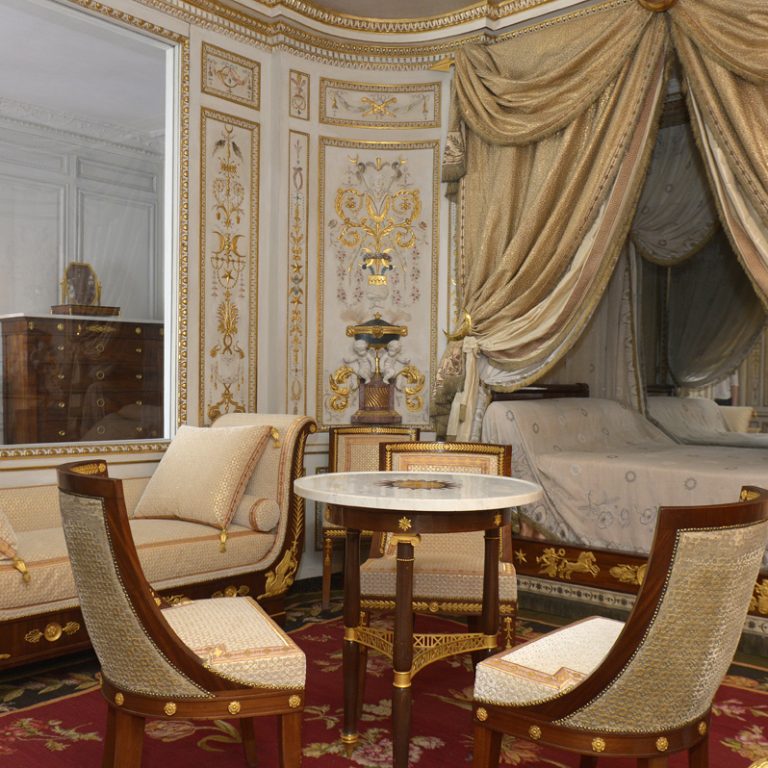 Louis XV and Gabriel disappeared before the “grand design” to reconstruct the White Horse Courtyard was completed. It was still being considered under Louis XVI, but with worsening finances, the young king swept aside the ruinous project. Louis XVI chose to focus his efforts on expanding his apartments and developing intimate spaces with amenities in keeping with the taste of the period.

To do this, he doubled the size of the Francis I gallery wing in the north and a seven room apartment was created for the king housing his library, bathroom, toilet and powder room. The young Queen Marie Antoinette also benefited from this graceful refurbishment. In the autumn of 1777, they came to Fontainebleau to celebrate the Queen’s 22nd birthday and the gift she was given exceeded all her expectations. On the second floor of her apartments, the Rousseau brothers had installed new chambers in the style of the day, modern, perfectly executed spaces, which contrasted with the outdated and pompous décor of apartments.

The queen finally had a “boudoir” where she could “bouder” or sulk about court protocol and withdraw to a small chamber “furnished in the Oriental style, and, lit in the evening, by lamps placed in a wardrobe separated from the chamber by a large mirror” (Earl of Hézecques). The sophisticated luxury of this “Turkish” boudoir, decorated with arabesques, oriental paintings and panelling in exotic hues, was not lost on her contemporaries.

The refurbishments at Fontainebleau, the royal couple’s dream, secluded château where they could get away from it all, continued until 1786 and 1787: the Ancien Régime’s last visit to Fontainebleau was between 9 October and 16 November 1786. This was an opportunity for the monarchs to examine the new building works which they had commissioned the previous autumn – particularly the Queen’s silver boudoir on the first floor. Louis XVI and Marie-Antoinette never returned to Fontainebleau, and the queen never saw the sumptuous ceremonial bed which was delivered to her bedchamber in 1787: the kingdom was facing a serious economic crisis and the French Revolution erupted in the summer of 1789, to disturb the graceful skies of the 18th century… 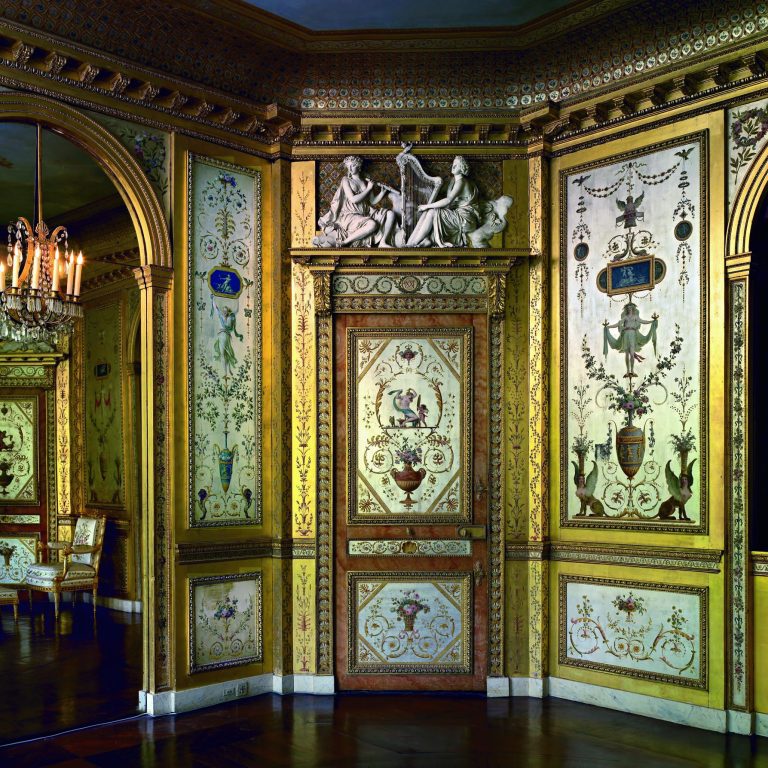 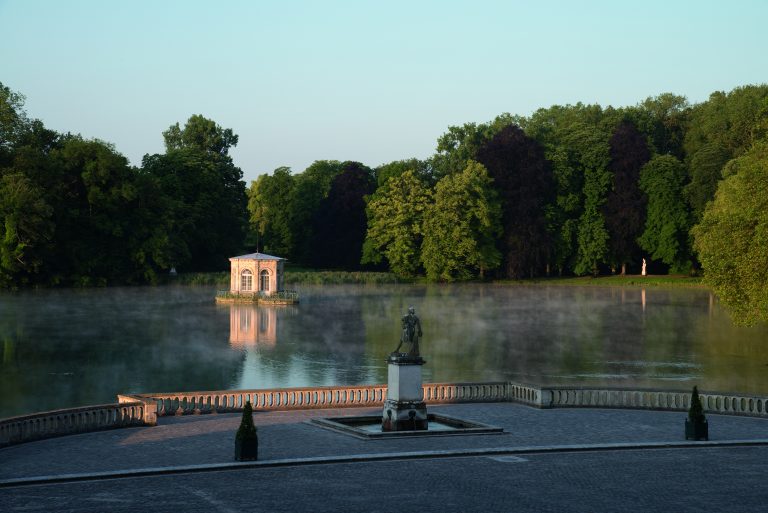 A château that defies the Revolution

What became of the “rightful house” of the Capetian kings in the revolutionary storm? In the early years of the Revolution, Louis XVI was still king and Fontainebleau retained its status as a royal house. On 14 July 1790, an obelisk topped with a Liberty hat, in honour of the “Citizen King” was erected in Place d’Armes. In 1792, after the Tuileries Palace was stormed and the royal family were imprisoned, the city and the château were republicanised. The pond was emptied of its carp, most of the furniture sold, the kennels demolished. The municipal architect, Saulgeot, considered transforming the château into housing for the city.

In 1793, in honour of the spirit of Marat, royal effigies torn from its rooms were burned “Place de la Montagne”, to “devour this hotchpotch of kings and queens ridiculously adorned with fleurs de lys” (citizen Marcelin): a portrait of Louis XIII, a masterpiece by Philippe de Champaigne, thus went up in flames. The château lived on though, because it became useful to the Revolution thus ensuring its survival: in 1796, the Central School of Seine-et-Marne, where students aged 12 to 18 were educated, was installed in the palace. However, the château was still threatened: The “national” estate receiver, Adam, was the vigilant custodian of this “monument, one of the most beautiful pieces of Europe“, and continually denounced the “greedy, scheming speculators, always ready to devour this national asset“. In 1803, the monument received its first visit from the one who would save it from total destruction: Napoleon.

When the monarchy fell, the Louis XV wing of the White Horse Courtyard became the headquarters for elite schools of excellence. In 1803, it housed the offices of the Military Academy of Fontainebleau, “intended to teach a portion of students from high schools about the art of war” (law of 11 floréal year X). This military academy began operating in June 1803, welcoming young people aged 16 to 18 for 2 years of training, which combined general education with military instruction. Sixteen hours of occupation per day and spartan living conditions formed part of the training for elite soldiers. 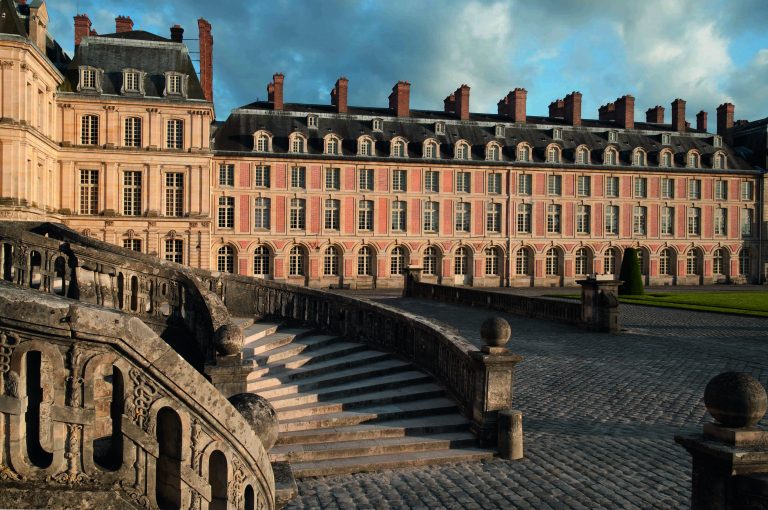 It was at the request of the First Consul, Napoleon Bonaparte, that this school had been created along the lines of the former Royal Military School of Paris. The new leader of France came to visit the Military Academy of Fontainebleau in 1803, and discovered for the first time the former residence of the kings of France which was then “in an extraordinary state of degradation and abandonment” (the architect Fontaine). When he became Emperor Napoleon I he gradually returned the monument to its former glory as a palace. In 1808, he moved the Military Academy to the site of the old school founded by Madame de Maintenon in Saint-Cyr. The Military Academy of Saint-Cyr is still there, training army officers and a number of officers for the French Gendarmerie.