Henry IV: A time of splendour

Just as Francis I had awakened the castle after the Hundred Years’ War, it was Henry IV who revived it after the Wars of Religion. A great hunter, the first of the Bourbon sovereigns was mindful of the splendour of his throne. He had known the Château de Fontainebleau in his youth, at the court of his Valois cousins. Propelled to the throne following the death of his cousin Henry III without an heir, this great-nephew of Francis I, a Protestant, had to fight hard to conquer the throne which was challenged by the Catholic League. As early as 1593, before entering Paris, which was still in the grip of his adversaries, Henry IV asserted himself as sovereign and re-established his court at Fontainebleau. Wishing to exorcise the memory of the civil wars after his conversion to Catholicism (25 July 1593), the Béarn native made Fontainebleau the symbol of a time of splendour finally regained, returning to the golden age of Francis I. He called for artists to return to court and greatly enhanced the castle and its gardens with spectacular water features and fountains. In 1601, when his heir (the future Louis XIII) was born in Fontainebleau, the palace, richly enlarged and embellished, became the cradle of the Bourbon royal dynasty, and found its way back into history… 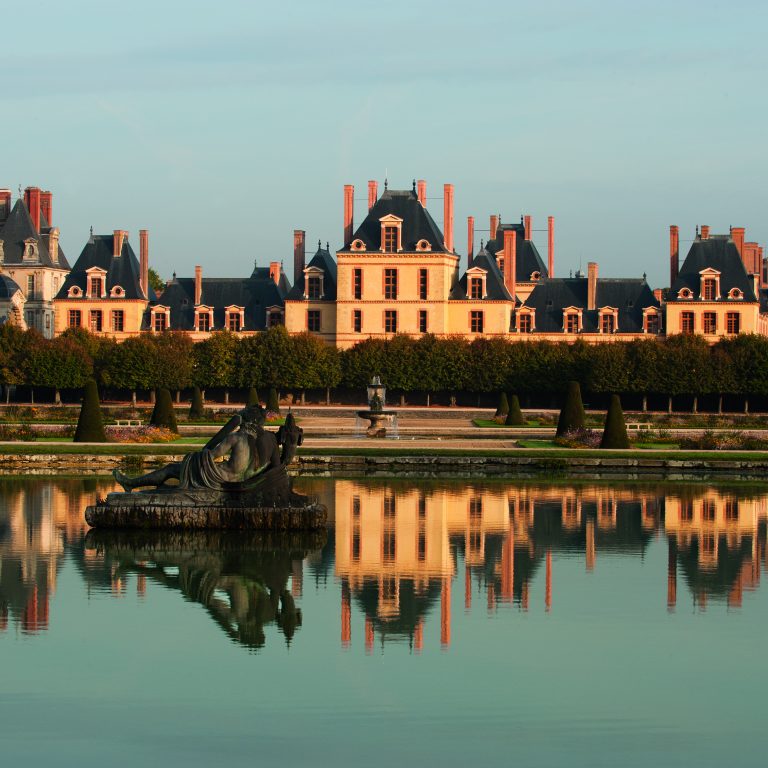 Beginning his ‘peaceful reign’ after the religious unrest had subsided, Henri IV appropriated the most emblematic heritage of the Valois in 1593. Even more infatuated with buildings than his great-uncle Francis I had been, the Béarn native set about restoring the Château de Fontainebleau.

Mirroring the constructions of Francis I, who had extended the castle to the west, Henry IV struggled to expand it to the east. Wishing to create a new access on the city side, he set about evening out the appearance of the old Oval Courtyard and opened it to the east with a new monumental gate with a triumphal arcade: the Gate of the Baptistery. Just as Francis I had had a ‘Great Lower Courtyard’ created to the west, which became ‘the White Horse Courtyard’, Henry IV had this new access to the Oval Courtyard preceded by a monumental forecourt, known as the ‘Office Courtyard’, which opened onto the city via a gate carved into a giant niche with architectural grandiloquence inspired by the Vatican.

After 20 years of disuse, the gardens underwent a spectacular re-flowering: in 1594 an island platform was created on the pond, a sort of ‘vegetated’ island dedicated to Michelangelo’s Hercules. Francis I’s Garden of Pines was redeveloped into ‘small gardens’ (fountain garden, canal woods, avenue of mulberry trees, fruit garden), with intricately shaped boxwood beds, arranged around fountains and water features created by the Francini fountain engineers. Fascinated by this mythology of water and the nymph protecting the estate, the king had the castle’s horizon opened to the east by having a large canal, measuring almost 1200 metres in length and running all the way to the village of Avon, dug between 1606 and 1609. 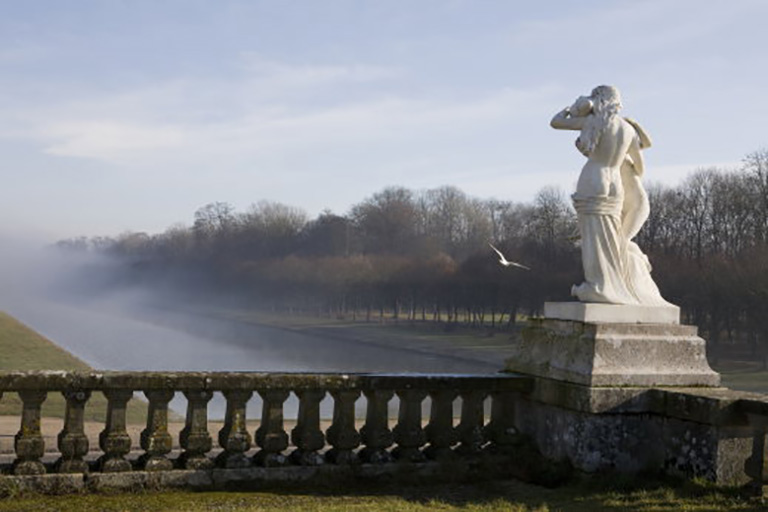 Mirroring the constructions of Francis I, who had extended the castle to the west, Henry IV struggled to expand it to the east. Wishing to create a new access on the city side, he set about evening out the appearance of the old Oval Courtyard and opened it to the east with a new monumental gate with a triumphal arcade: the Gate of the Baptistery. Just as Francis I had had a ‘Great Lower Courtyard’ created to the west, which became ‘the White Horse Courtyard’, Henry IV had this new access to the Oval Courtyard preceded by a monumental forecourt, known as the ‘Office Courtyard’, which opened onto the city via a gate carved into a giant niche with architectural grandiloquence inspired by the Vatican. 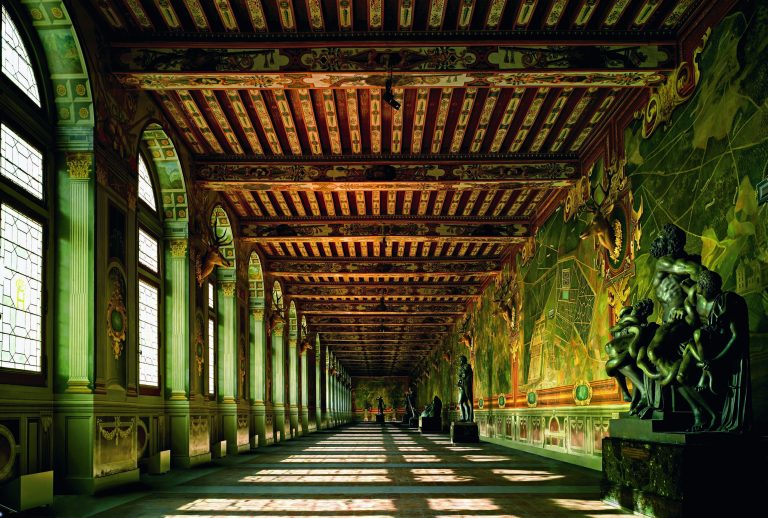 The cradle of the Bourbons

No less impressive was the interior work carried out by Henry IV. At the end of the stairway by Primaticcio, a reception room was fitted out and adorned with a monumental ‘Beautiful Fireplace’ with an equestrian relief in the king’s marble (1599). Inspired by the model of François I, who had made Fontainebleau a home for artists, Henri IV called on a new generation of painters and sculptors: Ambroise Dubois, Toussaint-Dubreuil and Martin Fréminet became the great names of what the history of art would later call ‘the Second School of Fontainebleau’. New galleries closing off the Queen’s garden, like the Stag Gallery and the Diana Gallery, received sumptuous ornamentation around 1600-1605, rivalling those created under the Valois.

A showcase of majesty, the castle was to serve as a theatre for the assertion of the young Bourbon dynasty. While the conflicts between Catholics and Protestants persisted, Henry IV attended the conference held on the 4th May 1600 in Fontainebleau between Monseigneur Du Perron, Bishop of Evreux and the Protestant theologian Duplessis-Mornay. He took part, royalty obliged, for the Catholic party.

But it is, above all, the date of the 27th September 1601 that decisively established the reign of the first Bourbon. Queen Marie de Medici gave birth to the first heir of the young dynasty in the oval chamber of Fontainebleau: the heir apparent was born there under tears of emotion from a 48-year-old Henry IV. On the 14th September 1606, the child was baptised in the Oval Courtyard, at the foot of the old Saint-Louis keep, receiving an old royal name which had been uncommon for almost a century: Louis. 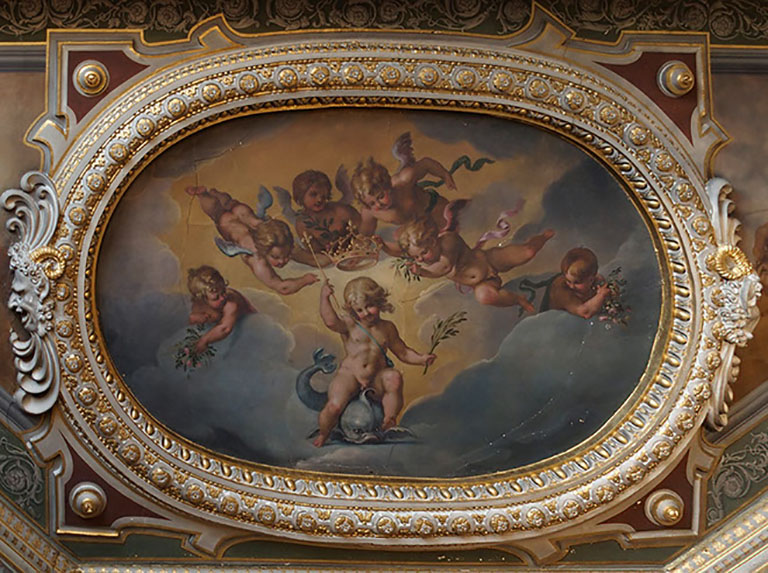 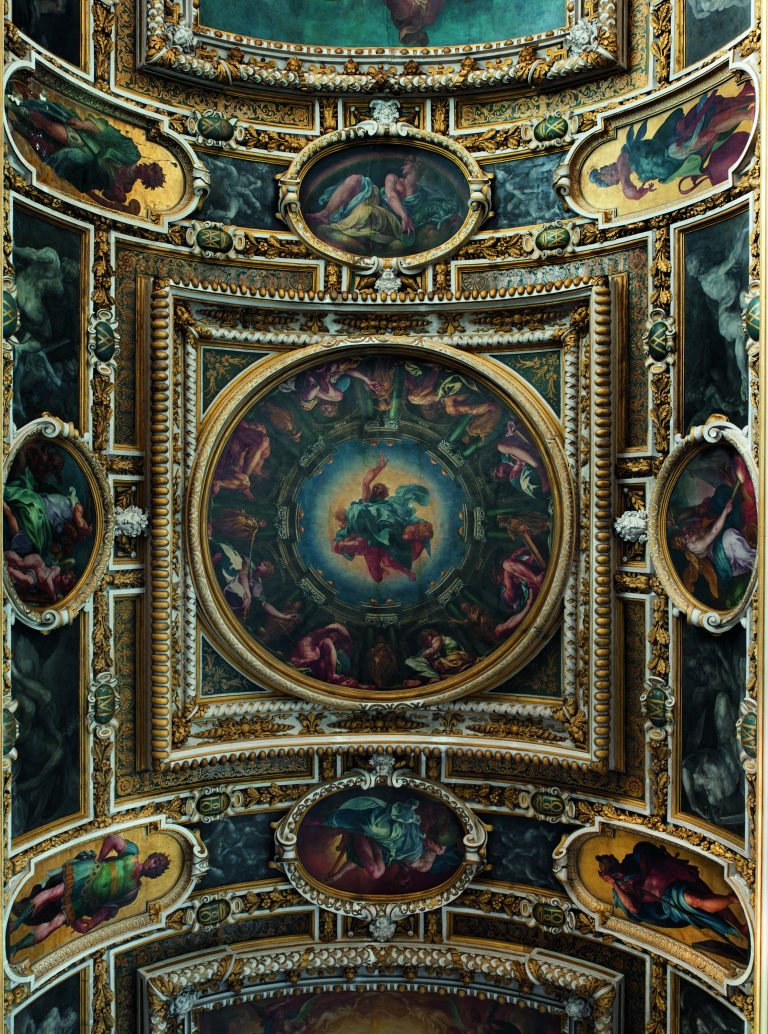 The Heir Apparent of Fontainebleau

By the autumn of 1609, the great canal of Fontainebleau was full, and Henry IV was able to sail with his son on the great body of water and hand the rudder over to the heir apparent. Six months later, on the 14th May 1610, three knife wounds by Ravaillac struck Henry IV in a Paris street adjacent to the Louvre, thrusting the eight-and-a-half-year-old child onto the throne.

Louis XIII had enjoyed a happy childhood in Fontainebleau, marked by hunting, real tennis and drawing lessons given to him by Martin Fréminet. Yet he made few changes to his birth palace. It was during his reign that, in 1633, after more than 20 years of work, the decorative work on the vaulted ceiling of the Chapel of the Trinity was completed. Commissioned by Henry IV, this Michelangelesque design was the work of Martin Fréminet and was an artistic manifesto for the ‘Second School of Fontainebleau’. In 1632, a new horseshoe staircase replaced the one by Philibert Delorme, whose shape did not suit the presence of the moat. With its completed royal chapel, directly served by this impressive degree of pomp and ceremony, the ‘White Horse Court’ became the new main courtyard.

For Louis XIII, the castle remained a sumptuous setting for great official receptions (such as that of the papal legate of Pope Francesco Barberini in 1625), celebrating the great moments of his reign. As such, on the 14th and 15th May 1633, in the Beautiful Fireplace Room and the Ballroom of the castle, 49 Knights of the Holy Spirit were promoted, including the Cardinal-Minister of Richelieu, who was confirmed, for the next 9 years, in his role as the all-powerful figure of the reign.

Even though, during his reign, Louis XIII preferred Saint-Germain-en-Laye to Fontainebleau, he always managed to recall, when asked, that he was from ‘Gâtinais’. In 1638, after the birth of his heir in Saint-Germain, he had the vaulted ceilings of the lower chapel of Saint-Saturnin in Fontainebleau decorated with dolphins celebrating the birth of Louis-Dieudonné, the future Louis XIV 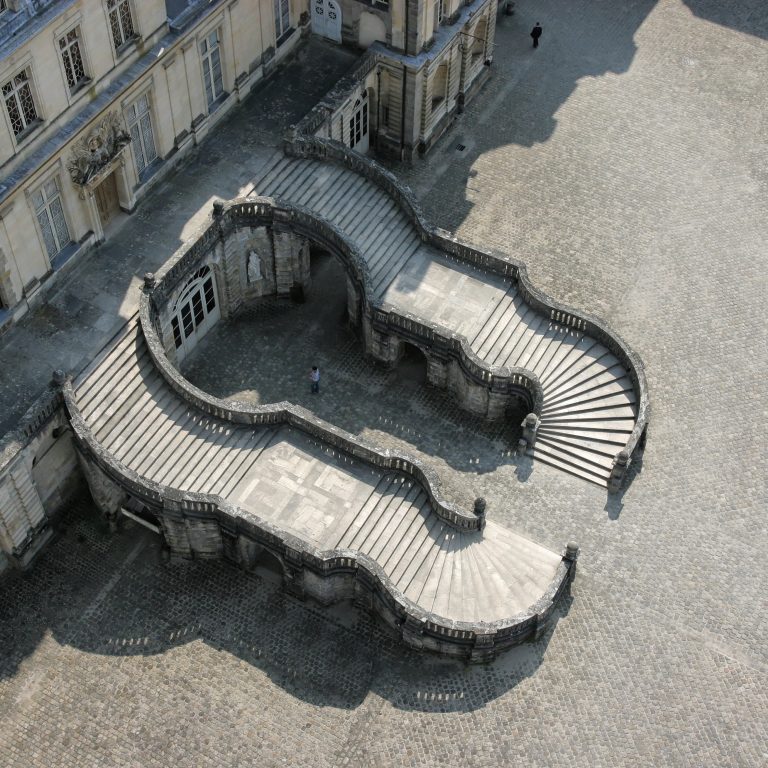 Due to security works, several rooms of the chateau will be closed all year long. We apologise for the inconvenience.