It is quite natural to associate Louis XIV with the Palace of Versailles, where the court moved to as early as 1682. Versailles would be for Louis XIV what Fontainebleau had been for François I. But the creation of the splendid palace of gold and mirrors did not leave the former Fontainebleau residence by the wayside. From 1661, it was in Fontainebleau that the young Louis XIV would run in his seat of power, deciding to arrest Superintendent Nicolas Fouquet and surrounding himself with the main players of the ‘Great Century’: Charles Le Brun, Lulli, Molière and Louis Le Vau formed the artistic court of a young, up-and-coming Sun King. The architect-gardener André Le Nôtre made his debut there and managed to clarify the space in Fontainebleau with the creation of the first 14-hectare Grand Parterre (1660 – 1664), a reflection of the king’s omnipotence and the shaping of his absolute monarchy. After the installation of the court at Versailles, Fontainebleau remained the hunting castle of a Sun King who came to stay there every autumn of his life, writing some of the great pages of his absolute reign…

In 1656, at the age of 18, Louis XIV met Christina of Sweden, an exiled queen who had requested permission to cross France. With a rather ungainly appearance, the ‘Swedish Amazon’ was physically compared to ‘Fontainebleau, whose buildings are beautiful and large but have no symmetry’ (Madame de Motteville). When Christina of Sweden returned to France the following year, it was quite naturally in Fontainebleau, where the court was absent, that she was forced to stay. It was during this stay that she committed a momentous crime in the royal house where she was a guest: she had her former favourite and great squire, the Marquis Monaldeschi, executed in the castle’s Stag Gallery on suspicion of treason.

On the 10th November 1657, the Marquis was summoned by the Queen and put to death by the captain of the sovereign’s guards and two hatchet men: ‘The gallery,’ the great Mademoiselle reported, ‘was covered in blood and, although it has been thoroughly washed, there are still traces of it’. This crime captured imaginations and aroused the fury of a young Louis XIV who had not yet learned to assert his authority. The murder of Monaldeschi, far from being a simple, bloodthirsty anecdote, stirred imaginations: at the time of the French Revolution, proponents of the total destruction of the castle were still calling for the bloodstain of an innocent man killed by a despotic queen to be washed away.

Louis XIV soon left his mark on the royal house of Fontainebleau. His reign was mainly characterised by a concern to clarify the garden layout. From 1660 to 1664, André Le Nôtre created a Grand Parterre with classical regularity, resulting in the disappearance of Henry IV’s ‘small gardens’.

Indeed, it was in Fontainebleau, in the summer of 1661, that the young Sun King cast his first rays. On the 20th April 1661, the young 23-year-old king decided to spend the better part of the year there and wait for the birth of his child carried by Queen Maria Theresa. 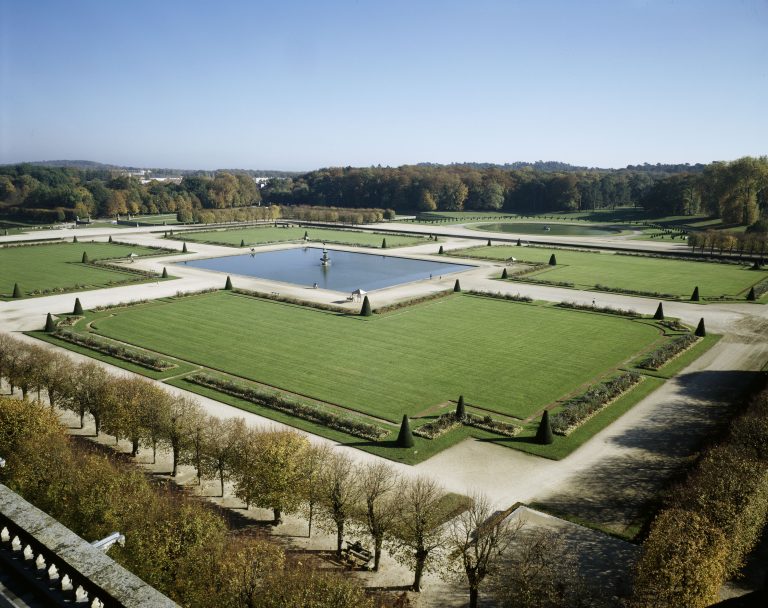 Having just regained the reins of the kingdom, the king staged Lulli’s ‘Ballet of the Seasons’ at the end of July, which was ‘the most enjoyable entertainment ever, both because of the place where it was performed, which was the edge of the pond, and because of the idea of bringing the entire theatre out of the alley’ (Madame de Lafayette). On the 17th August, Louis XIV left Fontainebleau to attend the famous feast given in Vaux by Superintendent Fouquet, where ‘music, water, chandeliers and stars shone’ (Jean de La Fontaine). It was on the 5th September, also in Fontainebleau, that the young king ordered the superintendent to be arrested. Finally, on the 1st November 1661, Queen Maria Theresa gave birth to an heir apparent. 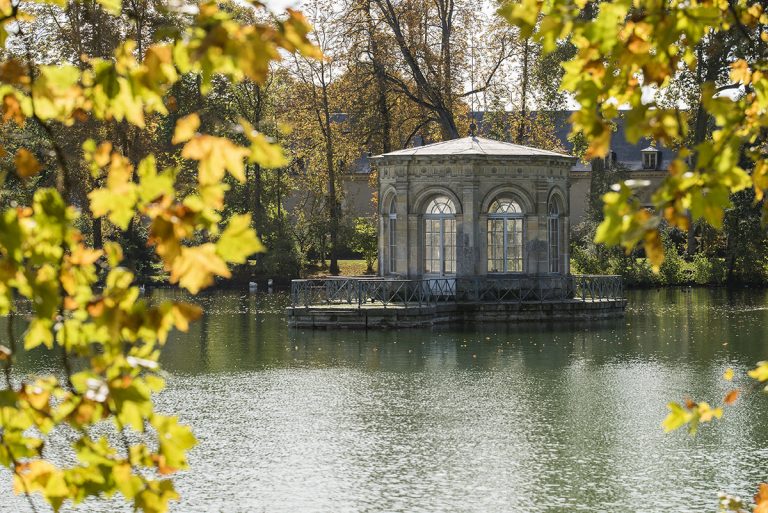 In 1662, Louis Le Vau erected a small half-timbered pavilion on the carp pond for Louis XIV, in the perspective of Henri IV’s canal, while the painter Charles Le Brun had been working on the creation of a canvas, The Queens of Persia at the foot of Alexander, from the end of 1660, which was to become the ‘manifesto’ of French classicism. In this way, Fontainebleau served as a majestic backdrop for the Sun King’s first demonstrations of power: on the 29th July 1664, Cardinal Chigi, the papal legate of Pope Alexander VII, had to come here to apologise to the sovereign pontiff following the clash in Rome between the Pope’s Corsican guards and the servants of the French ambassador. It was during this visit that Molière received the Papal Legate’s approval for his Tartuffe.

The castle of absolutism

After the installation of the court at Versailles in 1682, Louis XIV introduced ‘the journey to Fontainebleau’, making seasonal stays in Fontainebleau in the autumn. The court, dressed more warmly than at Versailles, came to attend the traditional St Hubert festival. An autumnal palace of hunting pleasures, the house of ancient lineage nevertheless remained a centre of power, where several important events of the reign took place. Between the autumn of 1690 and the autumn of 1700, James II Stuart, former king of England, stayed here ten times at the king’s invitation. On the 2nd September 1679, the treaty between France and Sweden on the one hand and Denmark and the Duke of Holstein-Gottorp on the other was signed. On the 5th November 1696, the arrival at court of Marie Adelaide of Savoy, future Duchess of Burgundy and mother of Louis XV, was celebrated. 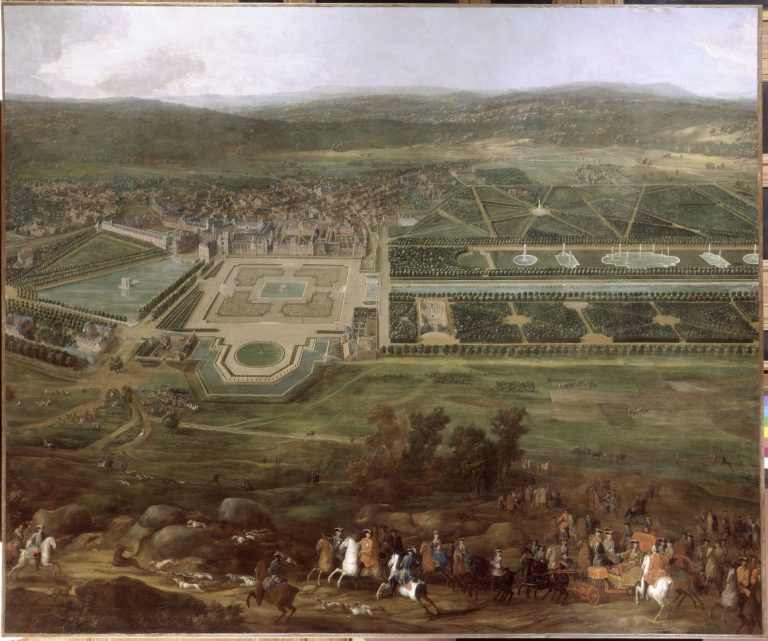 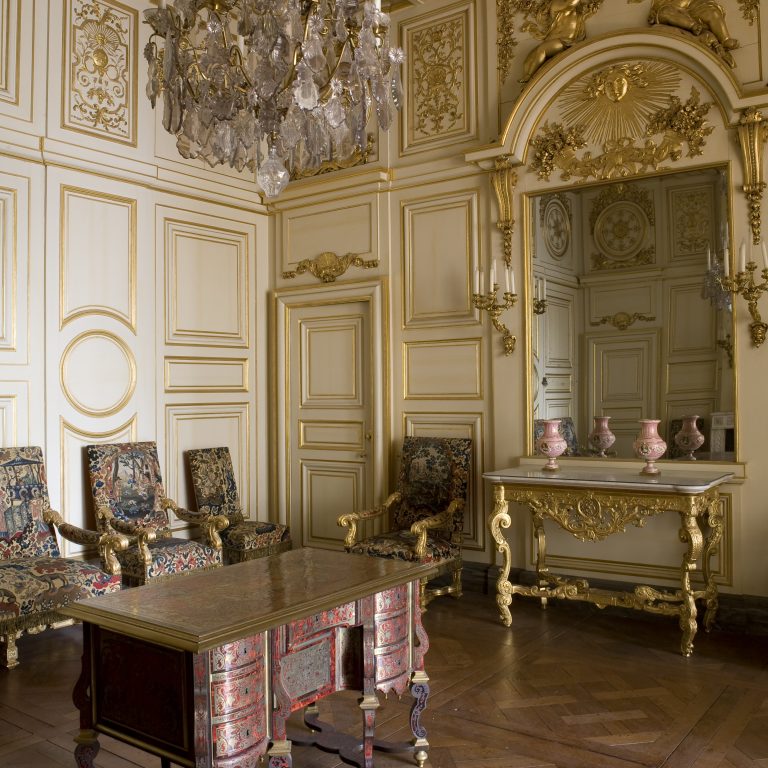 But the most important event in Fontainebleau during his reign took place on 18th October 1685. With the Edict of Fontainebleau, the king revoked, without raising an eyebrow, the Edict of Nantes of 1598 by which Henri IV had granted a degree of freedom of worship to French Protestants. This edict forced the Protestants to convert or leave the kingdom. Finally, from the 9th to the 11th November 1700, the ‘old king’ held several meetings in his second wife, Madame de Maintenon’s apartment on the first floor of the Golden Gate: there he decided to accept the will of the King of Spain, making the Duke of Anjou, grandson of Louis XIV, his heir. It was only during his stay in 1712, from the 21st to the 24th of August, that the negotiations conducted with Queen Anne’s envoy, Lord Bolingbroke, brought peace between France and England and put an end to the War of the Spanish Succession. It is still the Bourbons, descendants of Louis XIV, who currently reign on the Spanish throne…